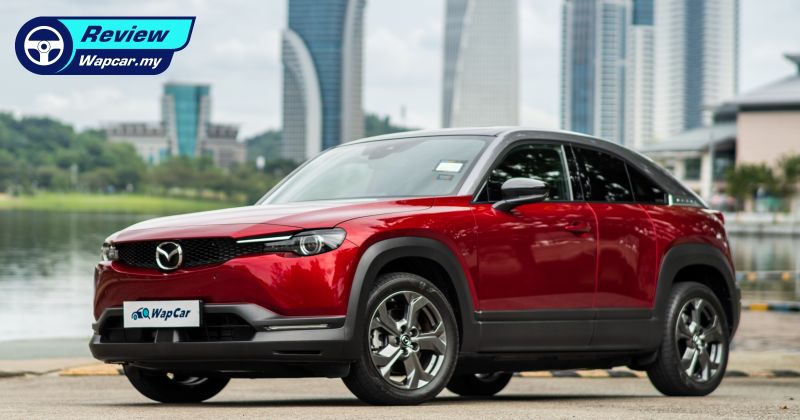 In 2017, Mazda said that it felt no pressure from its customers to build EVs, even stating a year earlier, that if they ever made one, it was simply to comply with strangulating emissions laws in the most lucrative markets of the world. Yet here we are with the 2022 Mazda MX-30 – their first global EV model, more on it in a bit.

Also in the same year, Mazda announced the revolutionary SkyActiv-X powertrain, which combined the benefits of a petrol and diesel engine into a single potent package, eking out more power and efficiency, and effectively showing how further CO2 reductions can be achieved from an internal combustion engine. Not that the world cared to hear, all they want were EVs. 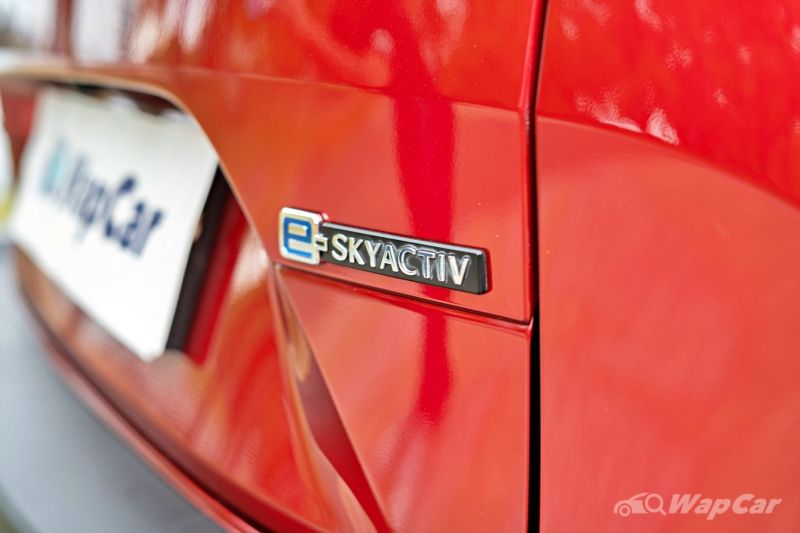 Mazda is known for its spirit of going against the grain, which stems from its firm belief in building soul-stirring cars, which are a charm to drive, for customers that they believe are as passionate as them. Thus, with the MX-30 have Mazda simply acquiesced and hacked together an EV to stay relevant (in record time no less), or has Mazda created a car they want to build, and thus you will love to own?

In answering the above question, the MX-30 is just the start of a comprehensive three-phase strategy that will see Mazda discontinue its regular SkyActiv combustion engine models within this decade and introduce a 100 percent electrified e-SkyActiv (hybrid or battery EVs) model line-up by 2030. So they are serious about electrification.

Also read: Next gen Mazda models to be either hybrid or EV only, 100 percent electrified line-up by 2030 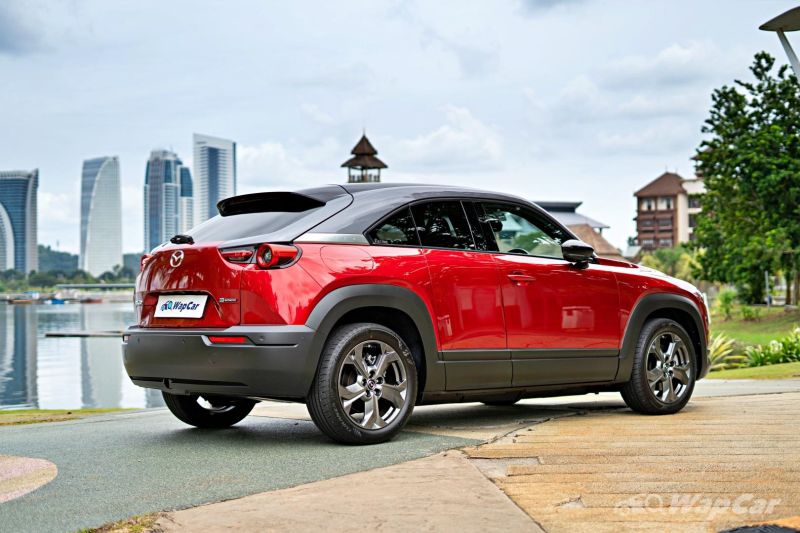 Having first debuted in 2019 – the MX-30 was officially introduced by Bermaz Motor earlier this year. The MX-30 is offered in one variant ‘EV High’ which comes in at RM 198,780 sans insurance. 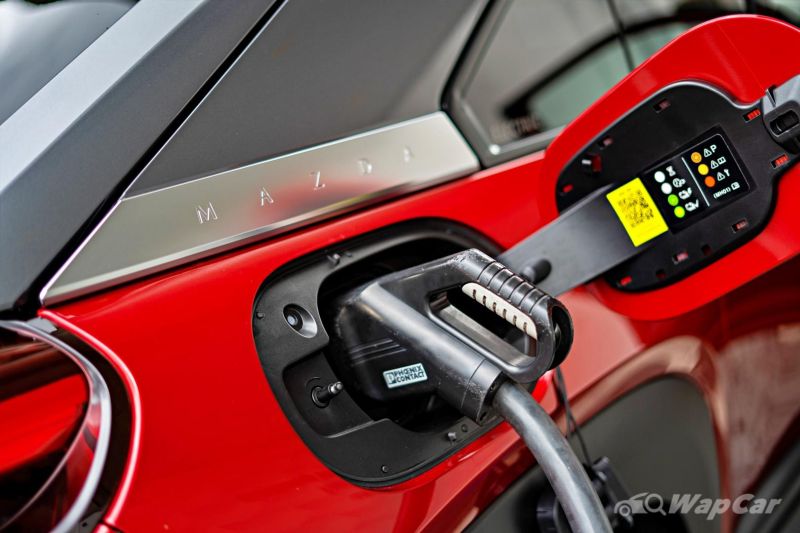 Although the MX-30 will be offered as a Ranger Extender EV in certain markets, only the battery EV variant will be launched in Malaysia, fully-imported (CBU) from Japan.

Under the hood (yes, the MX-30 still has a conventional hood but no front trunk) sits an e-Skyactiv EV motor that produces 145 PS and 271 Nm. Power is sent to the front wheels through a single-speed automatic transmission.

Power is supplied via a 35.5 kWh Lithium-ion battery that offers a WLTP range of 199 km, on paper.

Since its battery is rather small, the MX-30 required just 5 hours to fully recharge using a 6.6 kW AC charger. There’s no need for a more powerful 11 kW or 22kW AC charger. 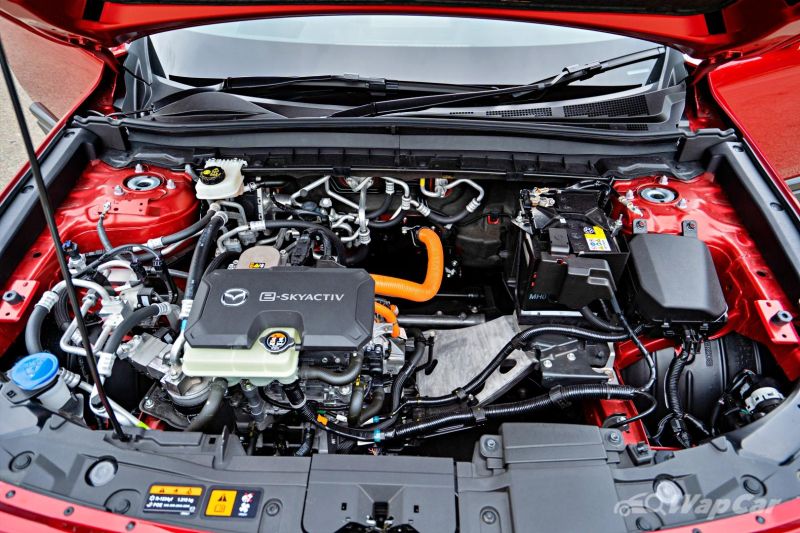 Note that Bermaz does not sell a proprietary Wallbox home charger, but customers will be advised on external vendors that they can purchase from. 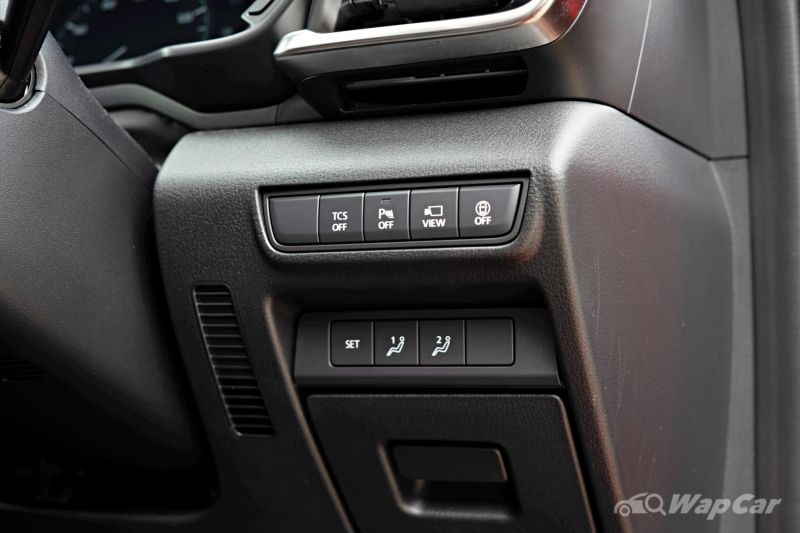 In terms of safety, the MX-30 offers the most comprehensive active and passive safety suite, packing certain features that the Mazda 3 and CX-30 do not offer. 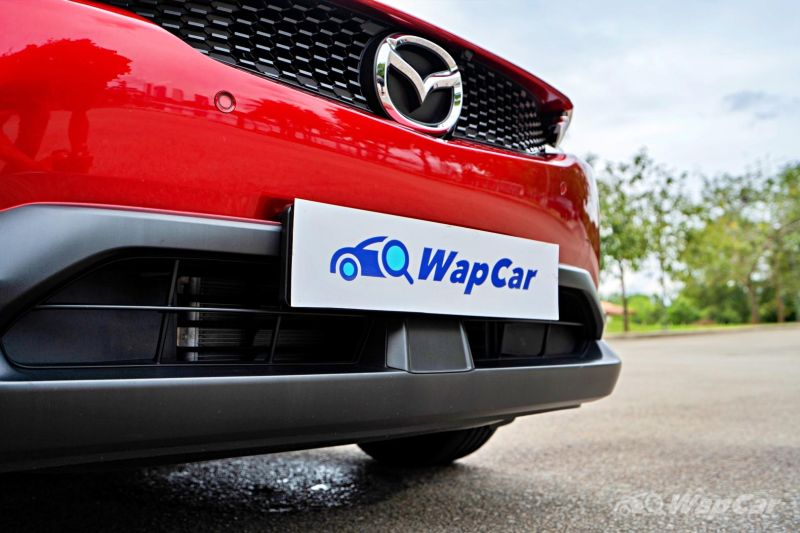 Also read: Review: Hyundai Kona Electric e-Plus – Is it time to get an EV? 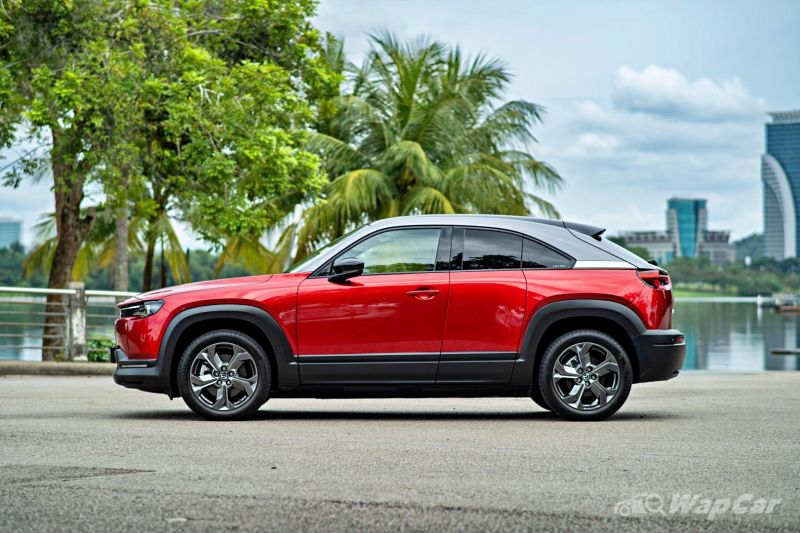 In true Mazda fashion, the MX-30’s styling is exquisite, thanks to its head-turning coupe-SUV silhouette packed with beautiful detail at every corner. Case in point, the MX-30 actually has three colours, including a black roof and gloss grey roof pillars, that further contrast the gunmetal 18-inch wheels (wrapped in 215/55 R18 tyres).

Mazda’s design principle with the MX-30 was to create continuity between the various body surfaces. We see this displayed in the sleek and sculpted front end, to the body contours along the flanks, which lead up to its rounded rump. 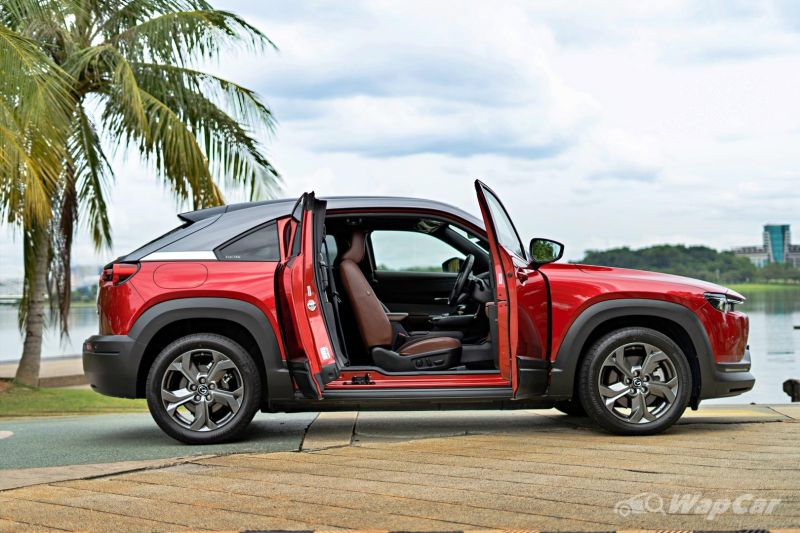 But, the biggest feature to brag about is the Rolls-Royce-style suicide doors – freestyle doors in Mazda speak – which was first executed on the Mazda RX-8 in the early 2000s. Though I’m 50/50 on it providing greater ease of entry to the rear, it’s a sublime bit of engineering, which gets ‘wows’ every time you pull on its chunky release latch to open the rear door. 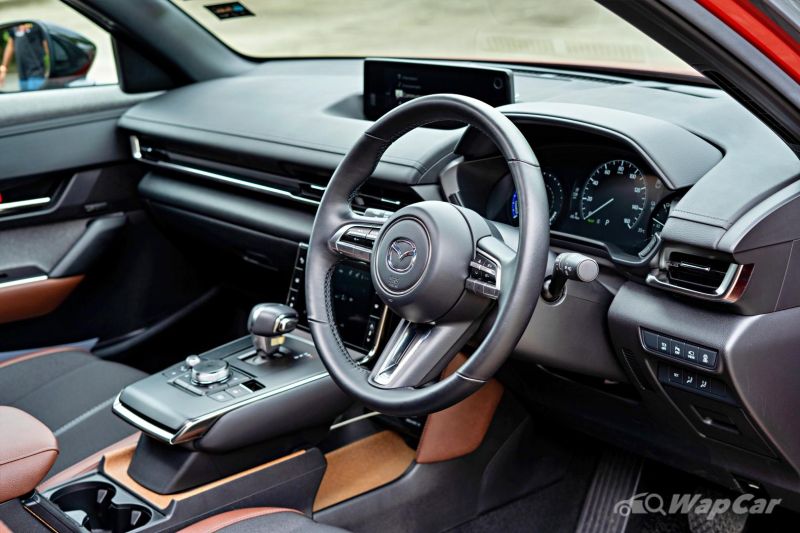 Aside from the styling, the MX-30 offers a uniquely premium interior made from sustainably sourced materials. Recycled cork adds a modern touch to the floating centre console and pays homage to the early days of Mazda, which was initially founded as a cork producer. Elsewhere, recycled fabric thread and plastic bottles are also utilized in selected materials throughout the cabin. 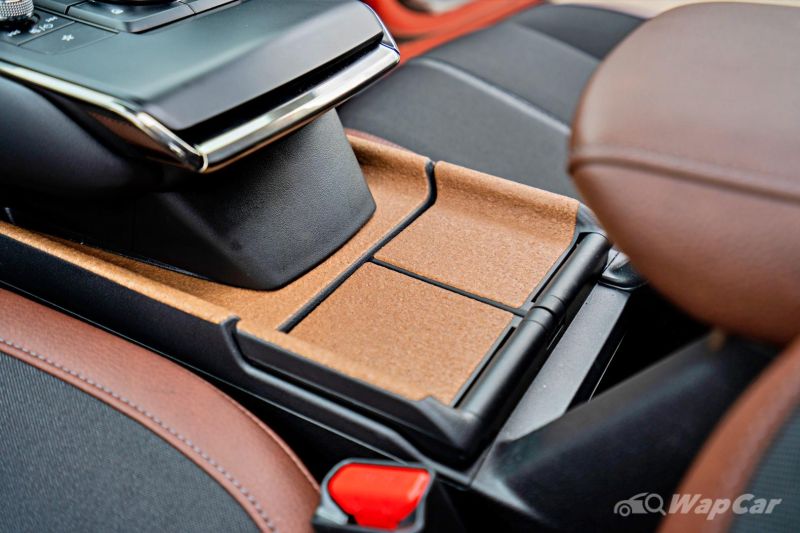 The interior of the MX-30 exquisite place to be in – both beautifully appointed and designed, with ergonomics to boot. Everything is within easy reach and there is great seat support and bolstering both at the front and back. 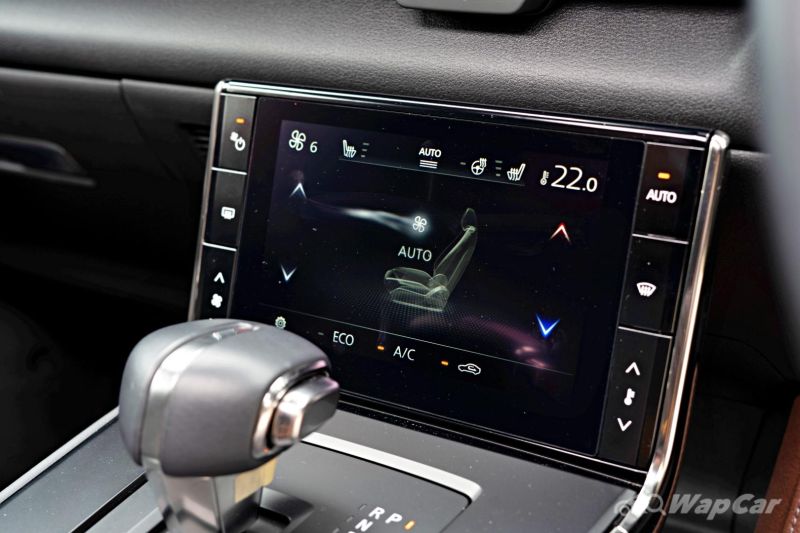 Another thing you’ll notice differently in the MX-30 is its climate control panel, which features a touchscreen panel flanked instead of the physical knobs (and a small display screen) in the Mazda 3 and CX-30.

In terms of infotainment, the MX-30 features an 8.8-inch MZD Connect Infotainment System with Commander Control Knob with Android Auto and Apple CarPlay connectivity. Like in other models, the MZD Connect is superbly designed and easy to use. 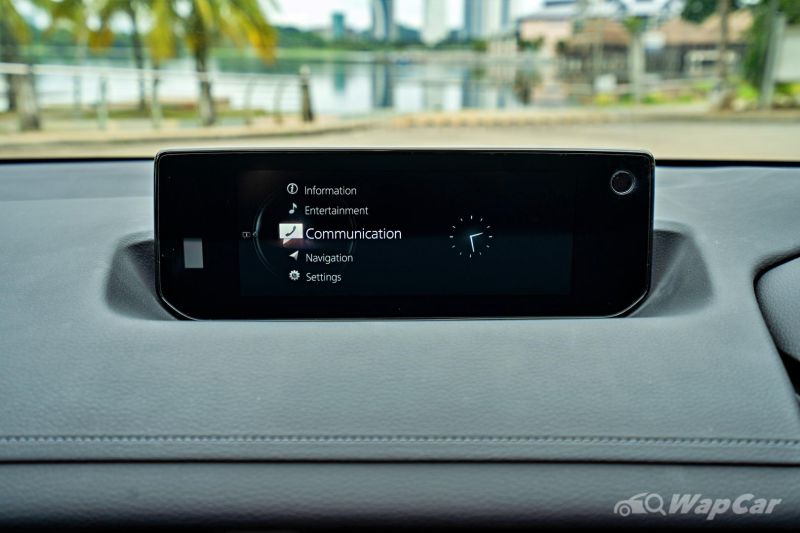 Given the additional navigation buttons, it’s extremely easy to navigate between screens, for instance between the Android Auto display onto the car’s battery and driving range displays. Audiophiles will also be pleased with the 12-speaker, yes 12, Bose premium audio kit, which beams tunes with great clarity and imaging without bass notes that overwhelm your ears. 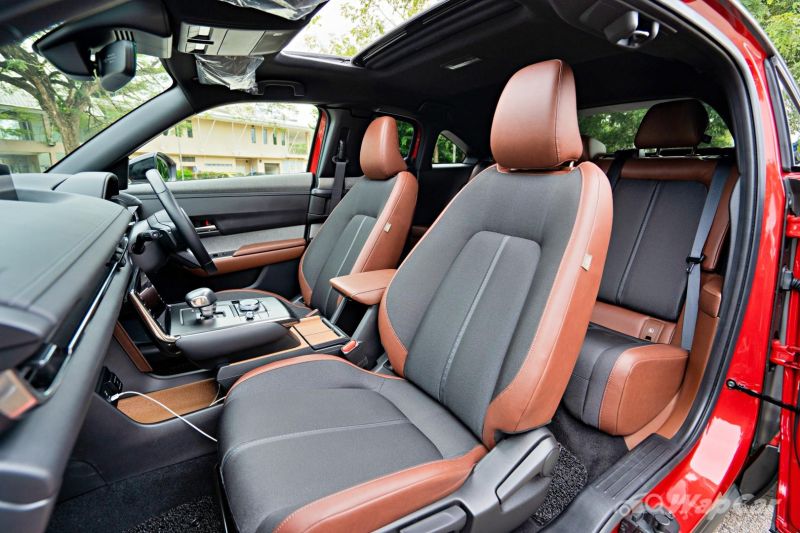 Where the MX-30 does lose points – and this can be a make-or-break decision, is rear headroom. Not that it’s inadequate, but because of its sloping roof, high window line, and freestyle doors, the rear quarters may seem claustrophobic for some, especially if you plan on carrying children. 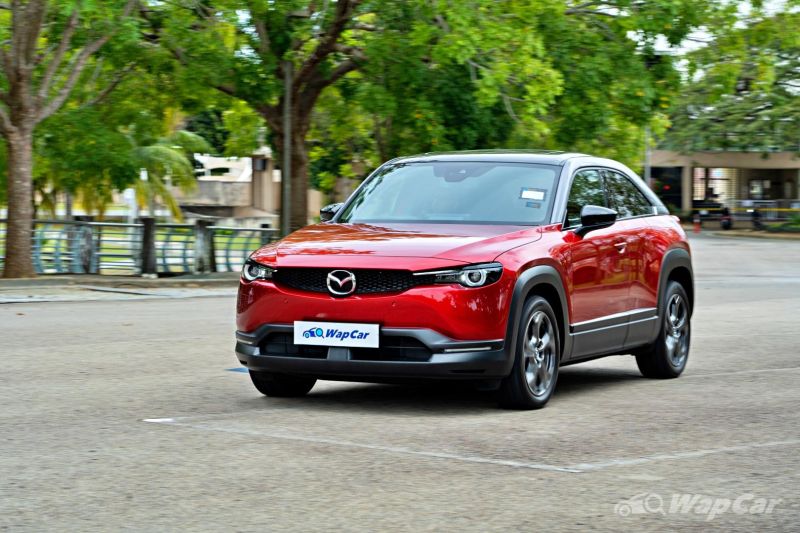 We have to begin with a caveat, due to scheduling limitations, we had limited time with the MX-30, but with that said, it doesn’t take very long to get used to.

Brandishing Mazda’s Jinba Ittai philosophy, there is an immediate connection once you get into the MX-30. The steering is in typical Mazda fashion – superb. It’s beautifully weighted, allowing good feedback through to the leather steering wheel, and the pedals are right where you need them. 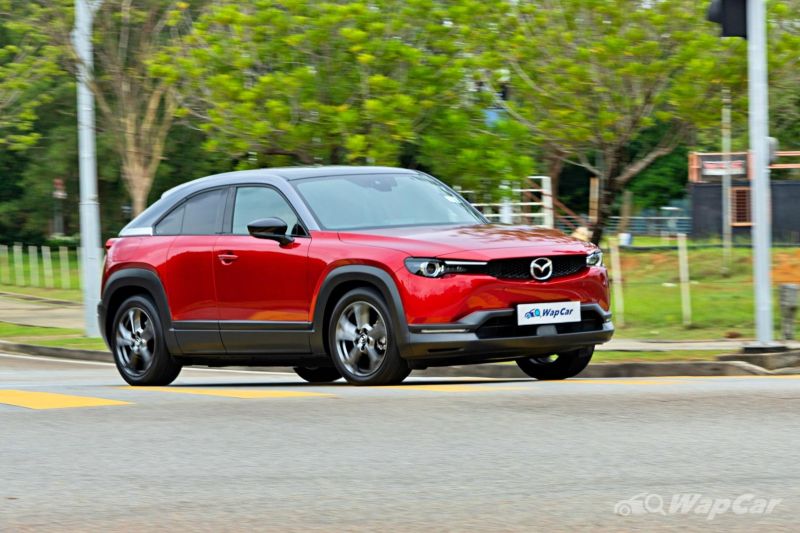 With 145 PS and 271 Nm of torque – the MX-30 does not offer neck-snapping EV acceleration, but the powerband is superbly modulated, easy to manage and very intuitive moving between the power, regeneration and braking phases.

To draw a comparison, power delivery feels very much like a torquey 1.6-litre turbocharged engine, albeit without engine sounds, in its place, a cool ‘swooshing’ noise that emanates into the cabin. 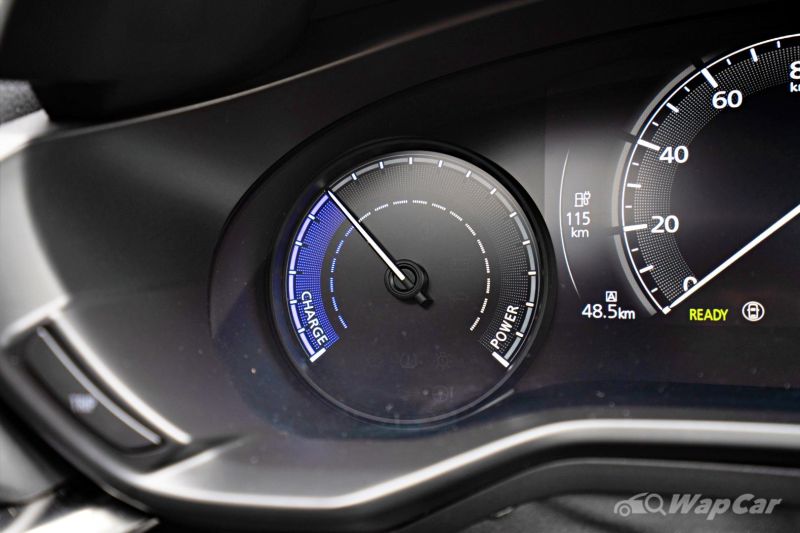 Let off the gas once at a cruise, and the MX-30 beautifully settles into a regeneration phase (regeneration rates are selectable through paddle shifters) – your body is never jerked or jolted forward as if gently applying brakes and engine braking at the same time. Another point to note is the MX-30 doesn’t offer one-pedal driving.

Thus, the MX-30 looks, feels, steers, and goes like a Mazda – but it doesn’t quite handle some others we’ve gotten used to. 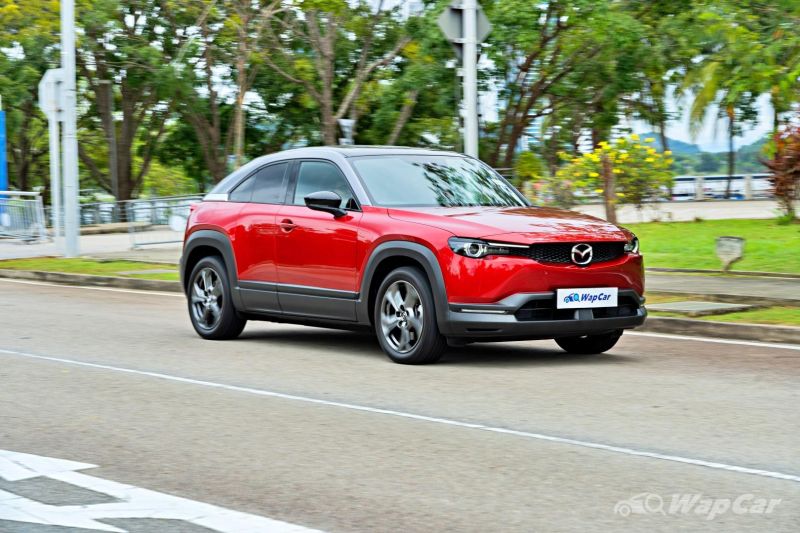 As we’ve said, there are pros and cons to sharing its platform with the CX-30 – on the plus side, it offers superb body control, brakes and steering, the downside though was perhaps the packaging space for batteries.

This has meant that whilst the batteries are mounted just below the floor like any other EV, the last row of batteries (at the rear) are stacked higher, placing a large load just before the rear subframe.

This is also why the MX-30 has a 40/60 percent weight distribution front/back, the total opposite of the CX-30. Thus whilst, the MX-30 handles small bumps and irregularities very well, it starts to move excessively at the rear when you catch larger bumps or undulations on the road.

Also, despite the smaller battery, which Mazda says is the right-sized battery for the MX-30, it’s not any lighter than the 39.2 kWh Hyundai Kona Electric e-Lite though (1,535 kg). 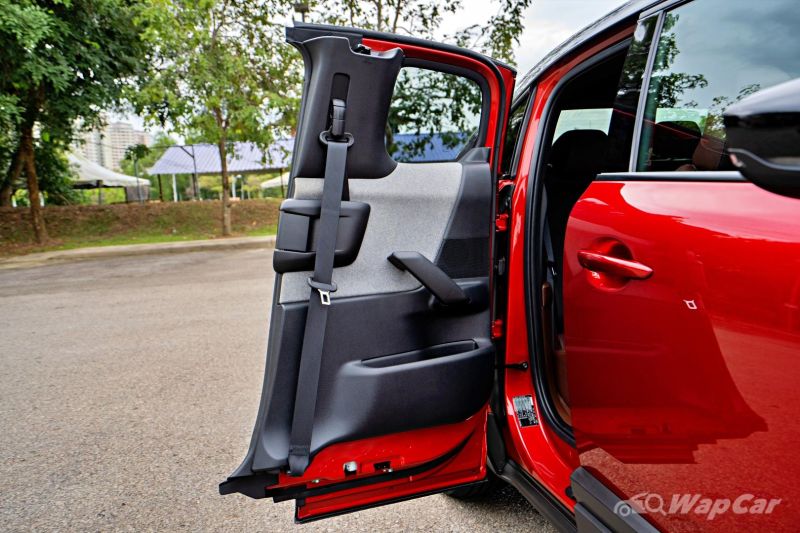 Much of downsizing the battery for weight has been negated due to the complex body reinforcements and side-impact protection for the freestyle doors. Thus, the MX-30 still weighs in at a substantial 1,645 kg. 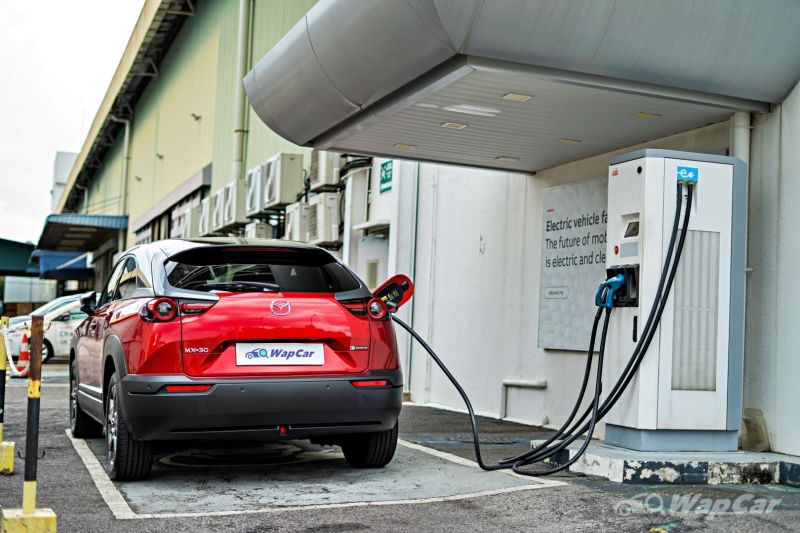 We managed to run a quick ‘fuel economy’ test – starting from Ampang at 90 percent charge, we headed to Putrajaya and back to Subang Jaya, a total distance of 81.4 km travelled, which consumed around 46 percent of the battery. 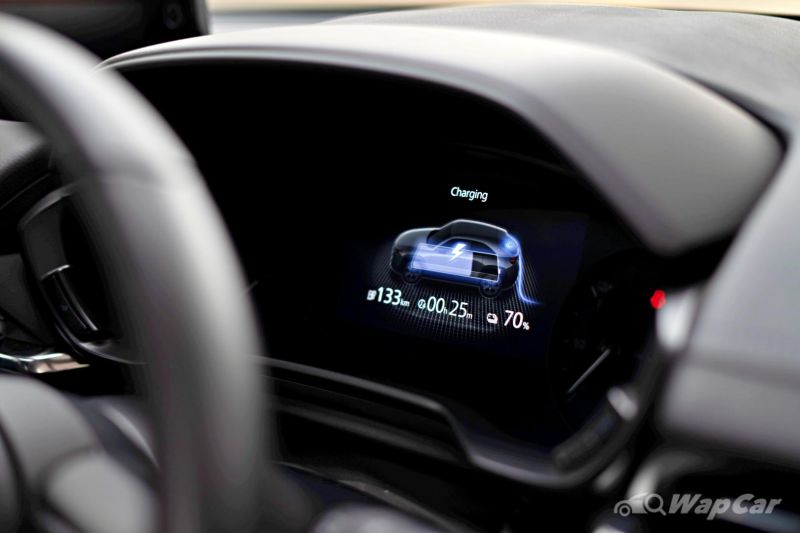 Topping the battery back up to 90 percent required 14.2 kWh of charge. If we compute the numbers, the MX-30 returns an overall energy efficiency of 17.4 kWh/100 km. All said and done, we estimate that the MX-30 will easily cover 150 km with a full charge and sensible driving.

This is adequate for most daily travels within the city, even without daily charging. 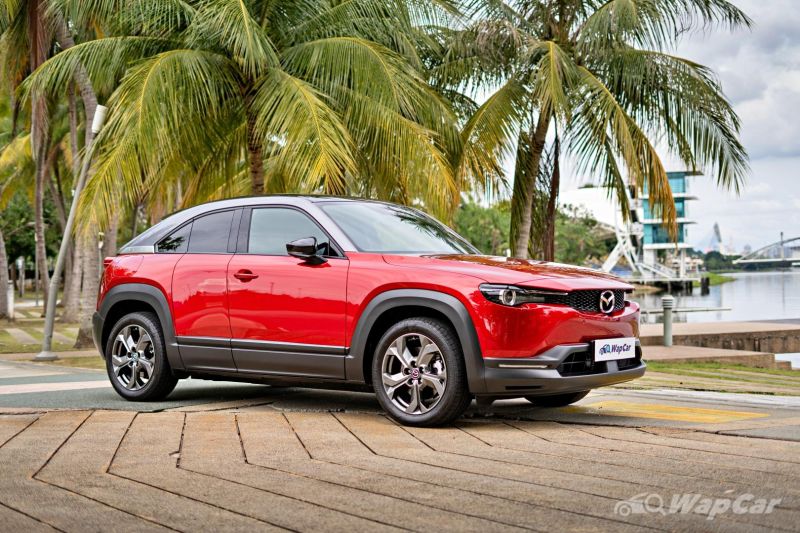 Perhaps it’s easy to look at numbers, in particular, the MX-30’s range and dismiss that it’s not a great EV but it’s way more than that. As a package, it’s accomplished, well-designed and superbly equipped in terms of creature comforts and safety equipment.

When Mazda says they gave the MX-30 the right sized battery, it’s because they know that most EVs despite offering massive operating ranges, are mostly driven around familiar routes, in urban settings. 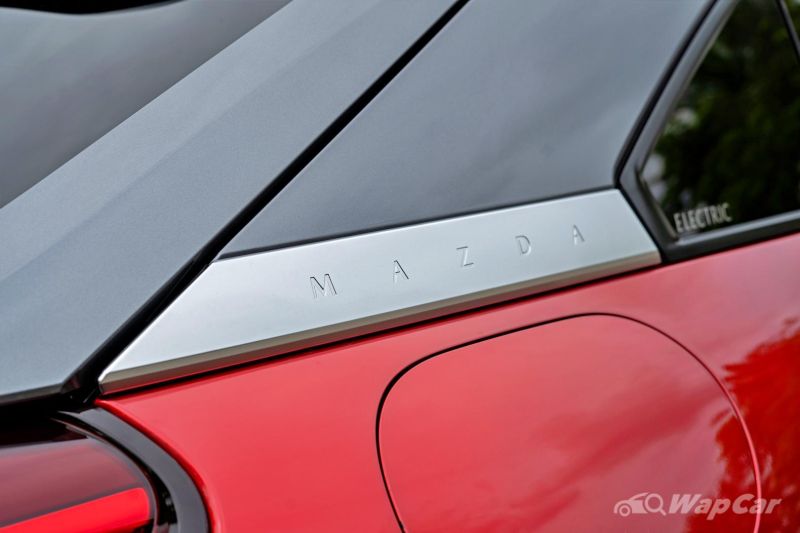 Thus, is very much adequate for what most owners will use them for. And once done, is quick and easily topped-up to get on the road again.

But in fairness, it’s not an EV for everyone – it is best assumed to be a lifestyle statement piece, but one that delivers an unique experience. And not many EVs do that once you get past the spec sheets.