Teaching doesn’t just require you to have full knowledge of a topic – it also requires you to understand the type of learner you’re working with.

I’ve had the privilege of educating many students over the last decade in applied language courses, such as debate, journalism, and media literacy. I also teach young people, all vying for a spot in the best universities, in college entrance test review classes.

Helping my students discover new things about the world and themselves is one of my most fulfilling passions. I enjoy it far more than writing or racing.

Nonetheless, my teaching skills help immensely when I coach new racing drivers – understanding how they think allows me to craft the right exercises and develop their driving.

One of my newest students tapped me to teach him in preparation for the 2023 season of the Philippine Autocross Championship Series.

And it just so happened that for one of our training sessions, I drove to the venue in one of Toyota’s newest salvos in the hybrid stakes: the Toyota Corolla Altis Hybrid. 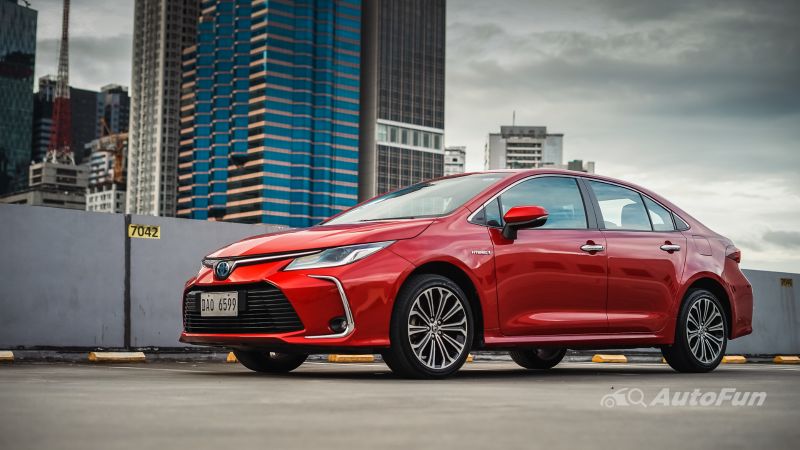 When you look at the Corolla Altis Hybrid, you can’t tell it’s got any hybrid technology if you take out the “HYBRID” badges.

It looks like any other Corolla Altis – handsome styling with a sharpness that the more bulbous Honda Civic lacks. 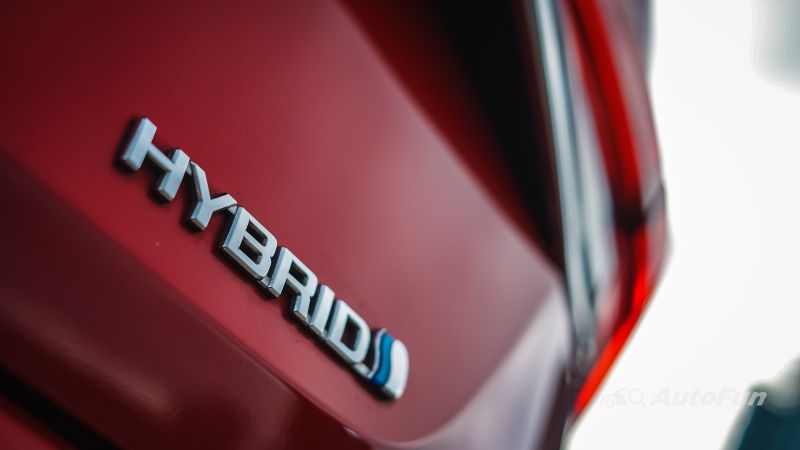 If you look more closely, details like the vivid blue trim in the headlights and the Toyota logos set it apart from the non-hybrid variants. 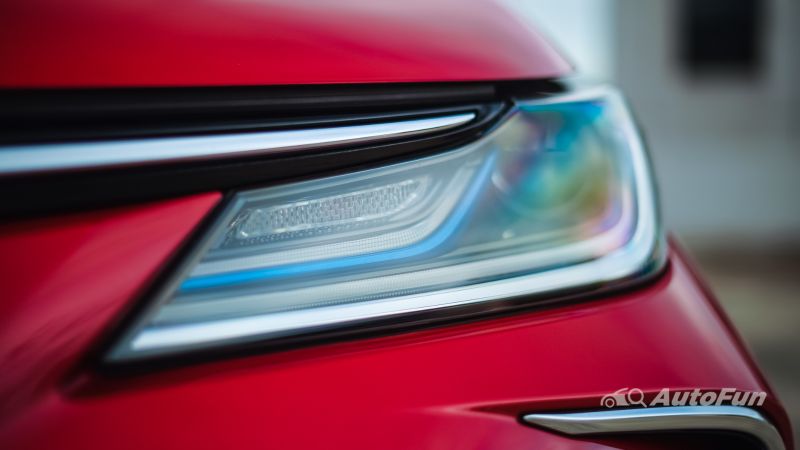 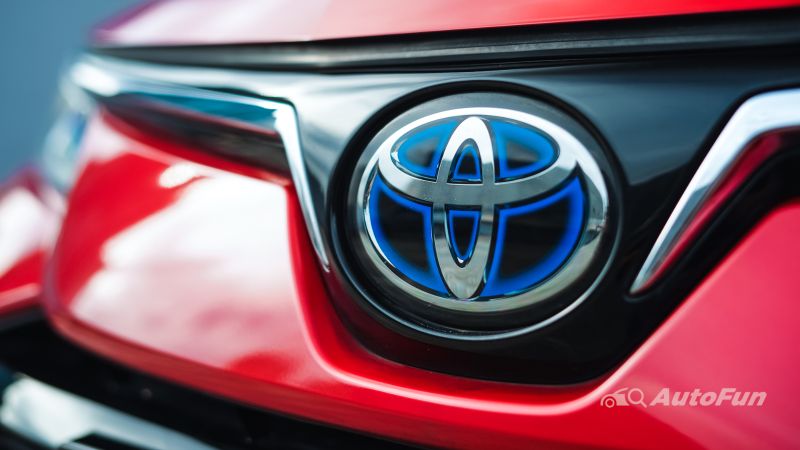 I also like the interesting choice of wheels – two-tone, 17-inch alloys running 225/45 series tires. They complement the Corolla Altis Hybrid’s lines well, although they make the ride a bit choppy over bumps. 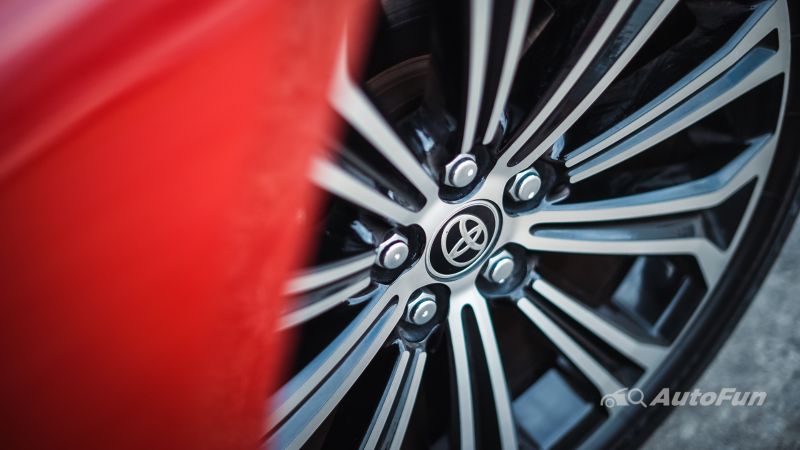 Trunk space is also good, easily fitting my 3-foot by 2-foot whiteboard without any trouble. There are also split-folding rear seats if you need to put in longer items.

Well-equipped cabin is wanting in plushness 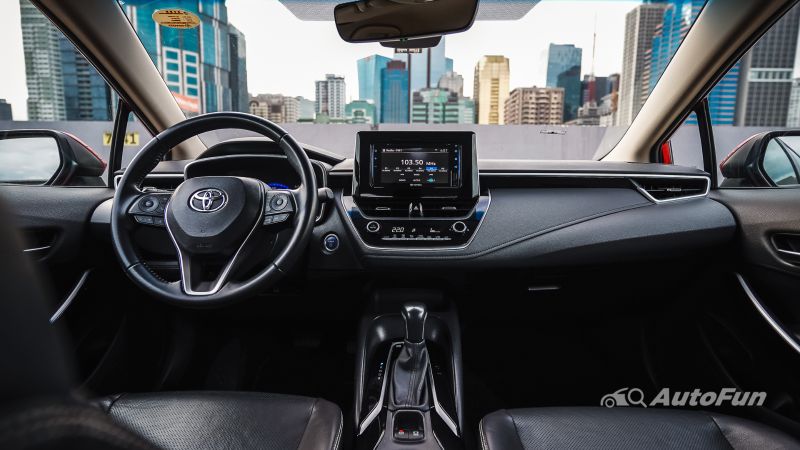 The normalcy remains when you sit inside the car.

You get a full leather interior with an electric driver’s seat so that you can get comfortable quickly. However, I did find that the seat lacked side and thigh support. 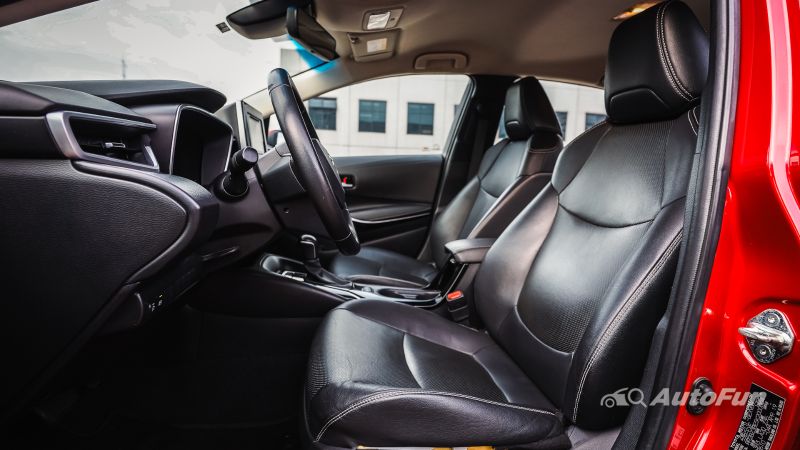 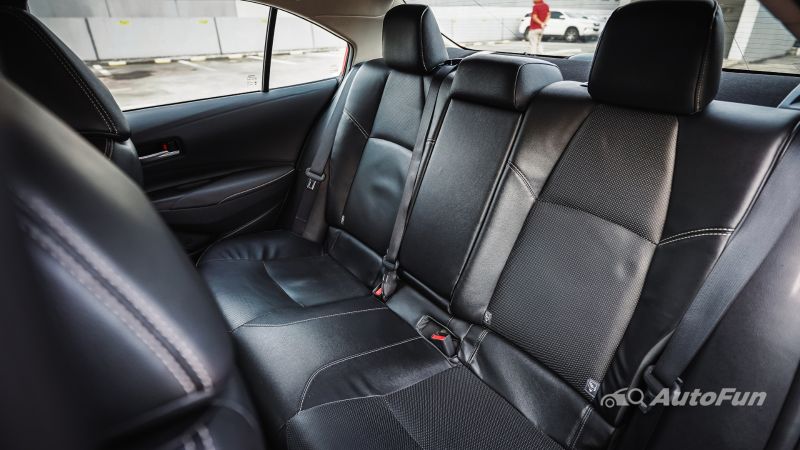 There are also rear air-conditioning vents and a rear sunshade so passengers can lounge in the fairly roomy back seat. 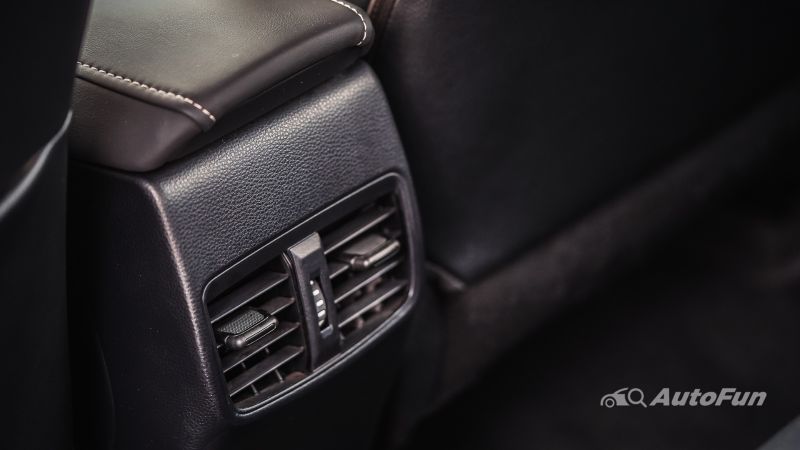 And I applaud Toyota for not using so many hard plastics. The dashboard and door cards use a soft, padded material, making it feel like a more premium model. 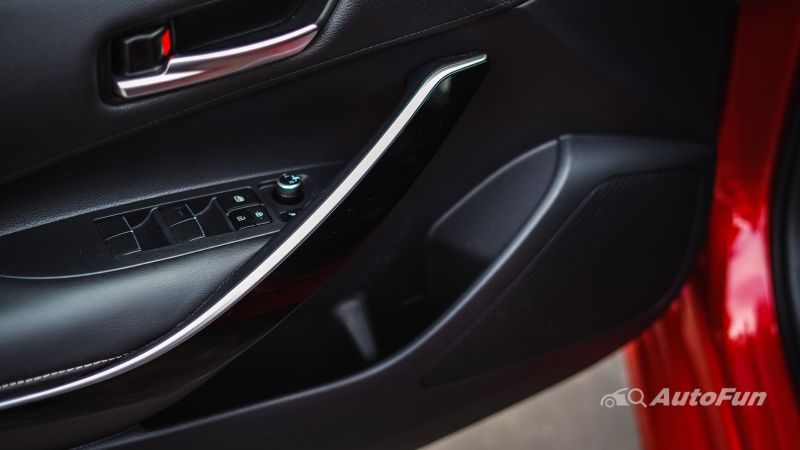 However, given that the Corolla Altis Hybrid goes up against the Honda Civic and Mazda3, the materials fall slightly short. The leather, for instance, is more supple in the Honda and Mazda. 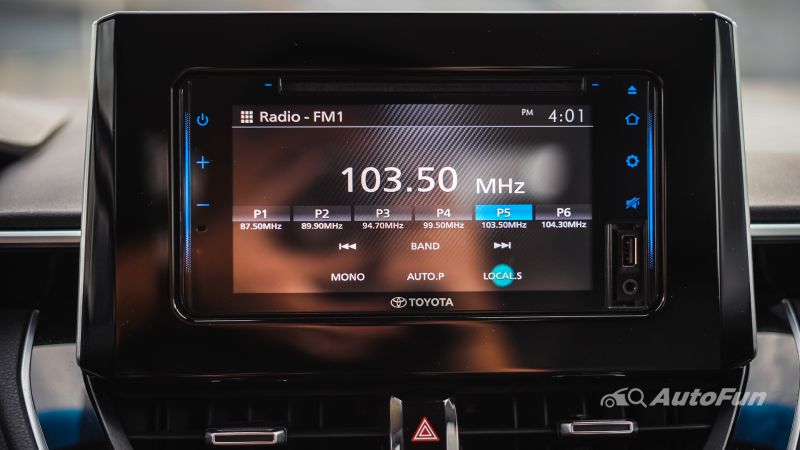 And the 7-inch touchscreen infotainment system is difficult to use on the move because of the tiny icons to adjust things like the radio station presets. For instance, the screen in the Honda HR-V Turbo I reviewed was easier to work with. 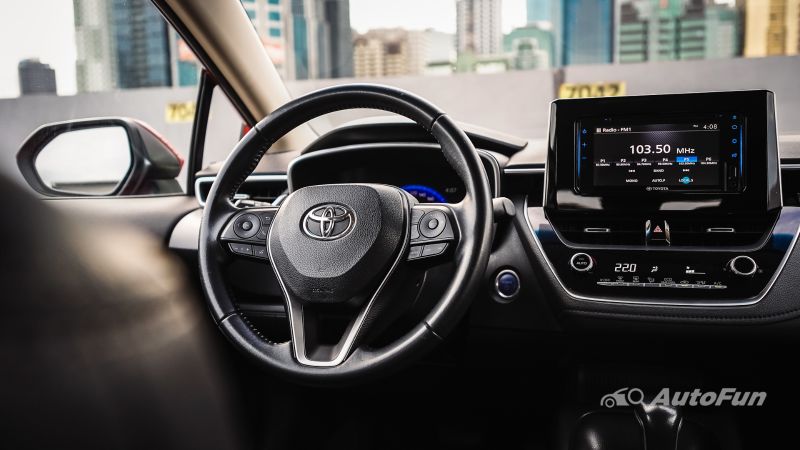 When you press the start button in the Corolla Altis Hybrid, you get nothing.

Nothing in the sense that the gasoline engine doesn’t turn over yet. The car’s systems are all running off the battery pack, and the engine only turns on, with a noticeable shudder, when you need more power or if the battery needs to be charged.

This makes the car whisper-quiet at idle and low speeds, automatically running on EV Mode to save more fuel. It was an excellent place for my student and me to chill out between drills.

And saving fuel is the Corolla Altis Hybrid’s forte. On the 88-kilometer trip from Quezon City to San Simon, Pampanga, for my student’s training session, it got 27 to 29 km/L on the expressway at 100 km/h in Eco Mode. 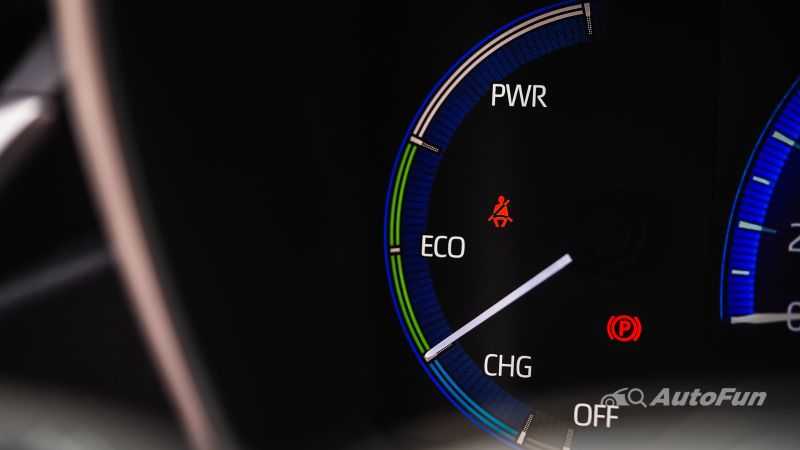 Driving on the expressway was made all the easier with the standard Toyota Safety Sense, which includes stability control, adaptive cruise control, lane-departure warning, lane-keep assist, and collision-mitigation braking.

These active safety systems worked excellently at all speeds, automatically bringing the car to a complete stop.

And when I used the Corolla Altis Hybrid for the 21-kilometer voyage from Ortigas to Fairview to visit my best friend Evans (who you met in my Honda HR-V review), the car still returned a mighty impressive 17 to 24 km/L despite facing all forms of traffic jams at 6 p.m. 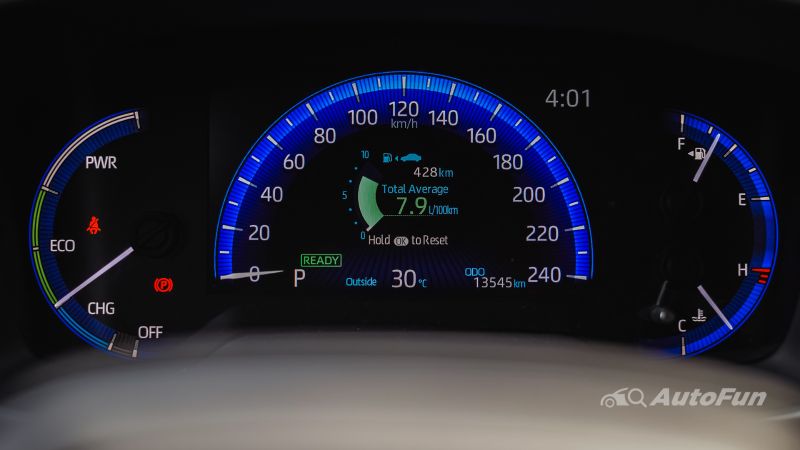 However, you have no clue how much juice is in the battery pack because the Corolla Altis Hybrid lacks the Toyota Prius’ excellent display that shows where the car’s power is going.

This means using the EV Mode manually doesn’t always work when you want it.

(Update: Apparently, there is a display that lets you check the battery charge. But getting to it is not that simple, unlike in the Prius.)

The Toyota Corolla Altis has one of the best chassis in the compact-sedan class, beaten only by the truly exemplary Mazda3.

This hybrid version loses none of the Corolla Altis’ prowess, ably handling corners with excellent stability and minimal chassis flex. 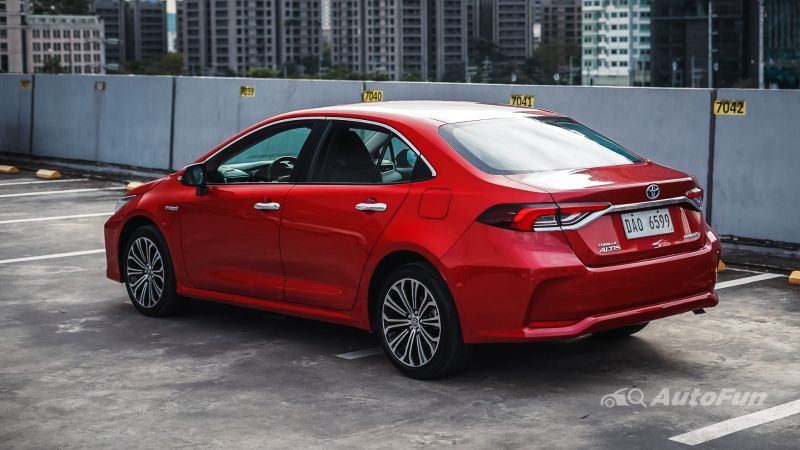 And unlike previous generations, the current Corolla Altis has fully independent suspension, using MacPhersons up front and double wishbones at the rear.

It also helps that the car is 44 millimeters shorter in length and 21 millimeters narrower than the rather-ponderous-handling Civic.

The Corolla Altis Hybrid’s light electric power steering is also excellent in traffic, although I wish it offered more feedback at higher speeds. 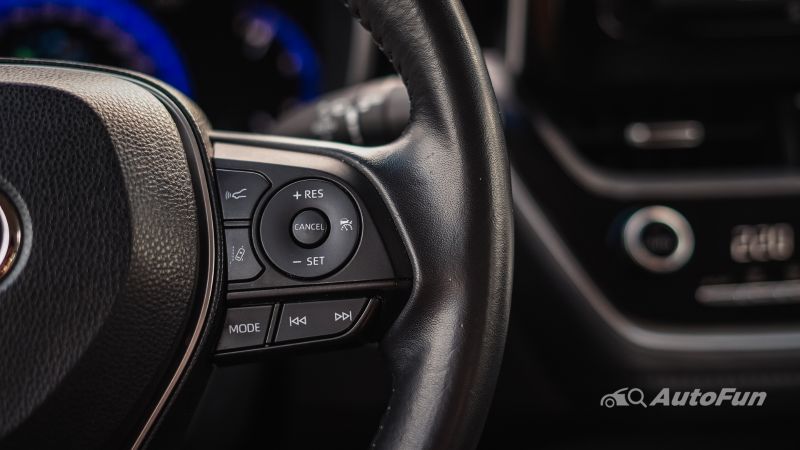 The brakes are also quite interesting because they have a regenerative braking system. This gathers energy from using the brakes to help charge the battery.

However, the system has a habit of suddenly increasing the braking action even when you don’t press harder on the slightly spongy pedal. This means you must brake quite hard from the get-go to prevent you and your passengers from gently lurching forward as the system kicks in.

Under the hood, the Corolla Altis Hybrid has a 1.8-liter, twin-cam, 16-valve inline-4 gasoline engine with an electric motor that produces a combined output of 122 PS and 142 Nm of torque. 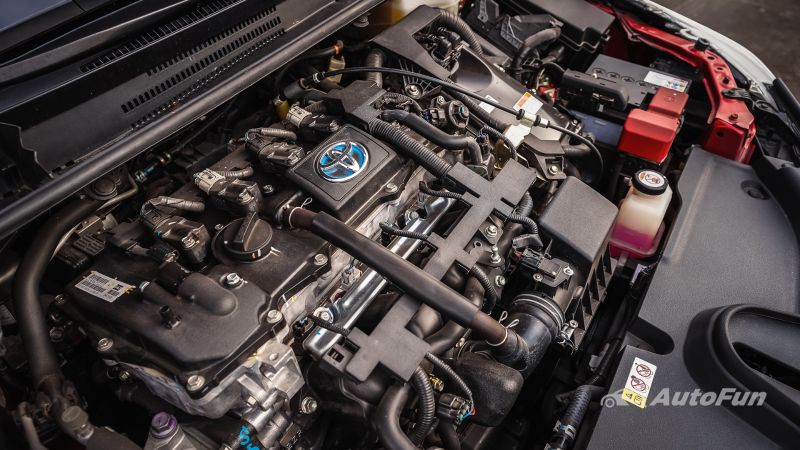 You get good acceleration when the gasoline engine and electric motor work in tandem. But it certainly doesn’t have the rapid (and quite addictive) heave of the turbocharged Civic.

With prices starting at ₱1,595,000, the Toyota Corolla Altis V Hybrid makes hybrid ownership far more palatable than the eye-watering cost of the Toyota Prius a few years ago. 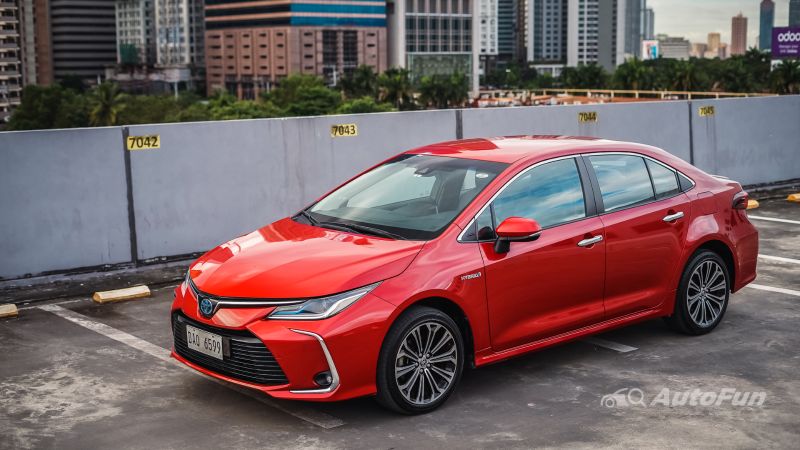 The Corolla Altis Hybrid differentiates itself in the compact sedan stakes by being more economical than either while offering road holding that’s almost as good as the Mazda.

However, there is one fly in the car’s excellent ointment – and it comes from Toyota itself.

The Toyota Corolla Cross Hybrid, which has all of the Corolla Altis Hybrid’s tech and chassis magic in a bigger crossover body, is only ₱70,000 more.

For many of my friends and some current sedan owners, they’d pick the Corolla Cross. That might be worth a test soon.

And as for my autocross student? He’s certainly got the car and the potential, but more training will really make him a top-class competitor like the Corolla Altis Hybrid.