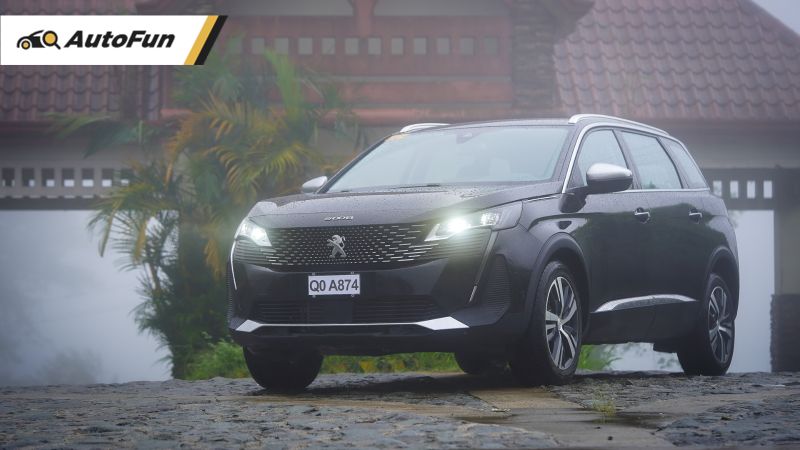 We Filipinos have a strong familial bond. For us, it’s not enough to bring the wife and kids to church, the mall, or out of town, the Lolo and Lola must tag along. Or maybe a Tito or Tita too. And that’s why seven-seaters have become popular over the last few decades.

Multi-Purpose Vehicles and Sport Utility Vehicles in three-row, seven-seater guise are a dime a dozen now. And with so many popular choices, finding something that stands out is getting more difficult.

For Peugeot, however, being a stand-out has never been a problem. It does everything to be different, unique, and out of the ordinary. So when it decided to enter the seven-seater ring with the 5008, we expected it would bring something new to the game. 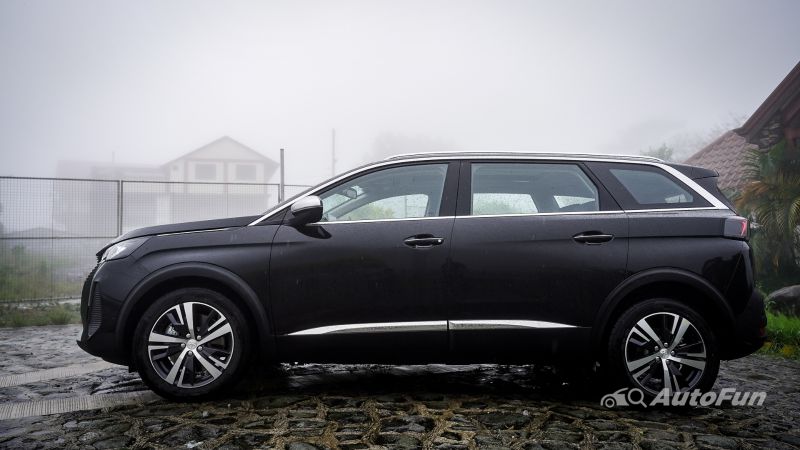 An SUV pretending to be an MPV? 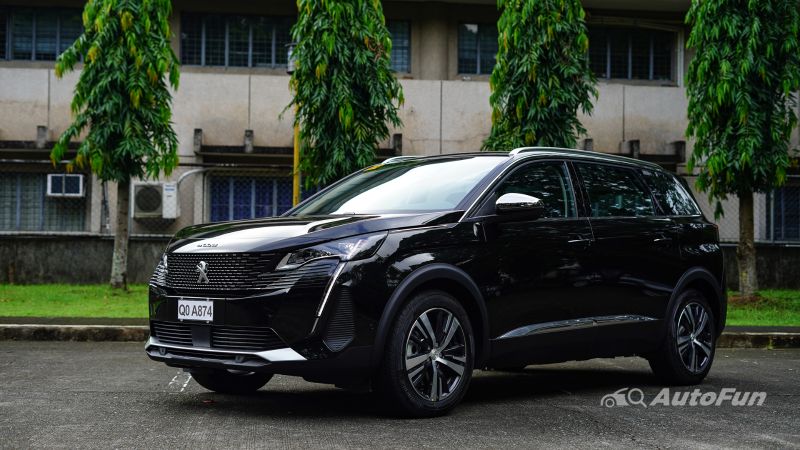 The first generation 2009 Peugeot 5008 was conceived as an MPV. And in Europe, that means a low-slung mini-van with five doors. But in 2017, responding to the market demand for SUV body styles, Peugeot switched to an SUV format for its people hauler.

In what is essentially a stretched Peugeot 3008 (the French brand’s compact crossover), the three-row 5008 began to shed its mom-mobile looks and brought its dynamic, edgy presence into the mix. 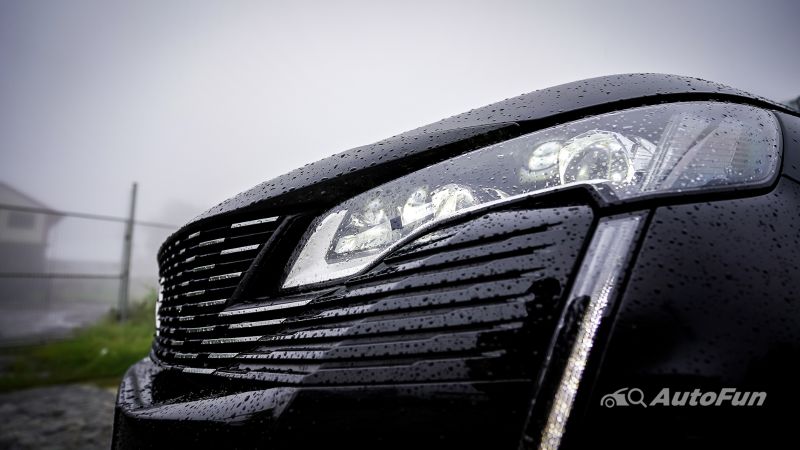 After a radical facelift in 2017, the Peugeot 5008 shed its MPV persona to cater to the SUV market with an aggressive, intricate, and dynamic makeover. It has adopted the same look found in the rest of its model lineup. And despite its age, it still carried the new garb well.

Fang-like DRLs and claw-like LED taillights hark back to the brand’s iconic Lion Rampant logo. This new brand identity has made the 5008 a more lively crossover and less of a boring family van. Solid shoulders and square-cut edges lend to a stylish masculine stance befitting the brand’s logo. “Gwapo” is one adjective that best describes the Peugeot 5008, and it’s a description that is carried over to the rest of the lineup. 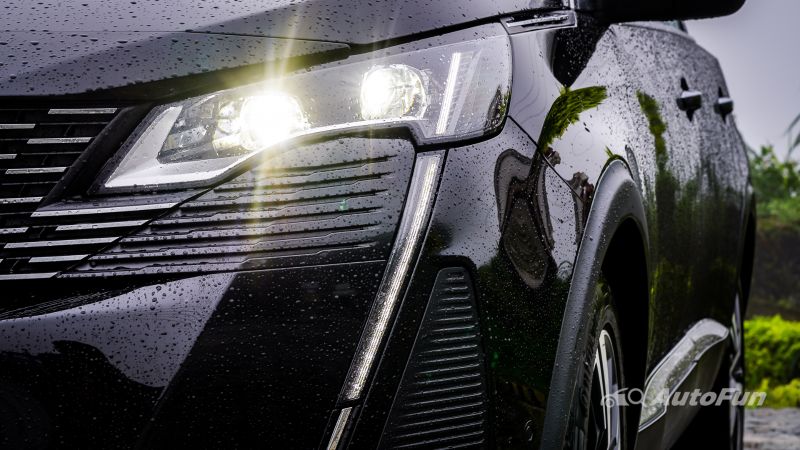 Consistent inside and out

The aggressive character lines outside reflect on the interiors of the Peugeot 5008. To say that the interior design is edgy is a literal understatement. Aside from featuring hard corners and distinctive cuts on what other brands would render instead as smooth and soothing, the dashboard, door panels, and even the center console are all about straight lines. The cabin looks smart and sophisticated, so there’s no complaint from us here. 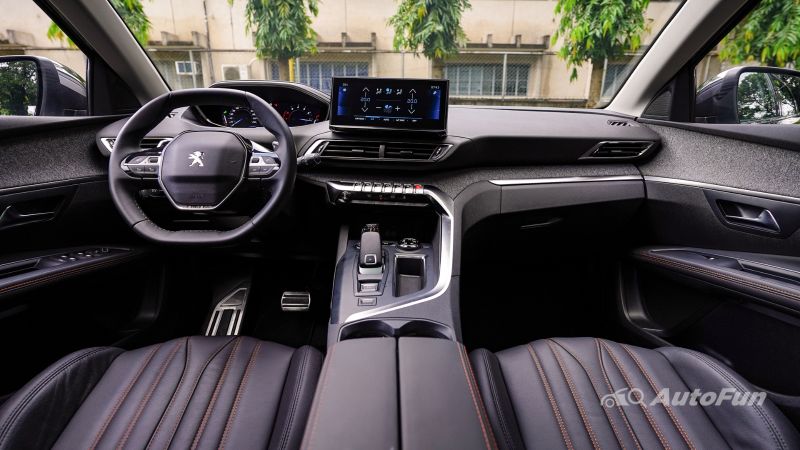 Even the choice of materials for the interior accents is noticeably left-field in thinking. Instead of the usual faux wood, carbon on metallic pieces, a grey fabric lines the dashboard to the doors. This material choice makes the interior look rugged, in a denim jeans way, but still fashionable and different. 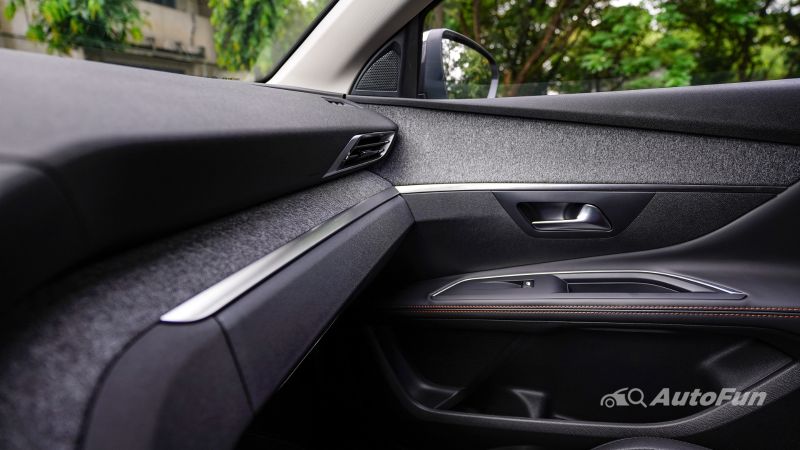 You will notice, though, that some bits and pieces, as well as the Graphic User Interface of the touchscreen infotainment, are borrowed from Peugeot’s sister marques, Citroën and DS. 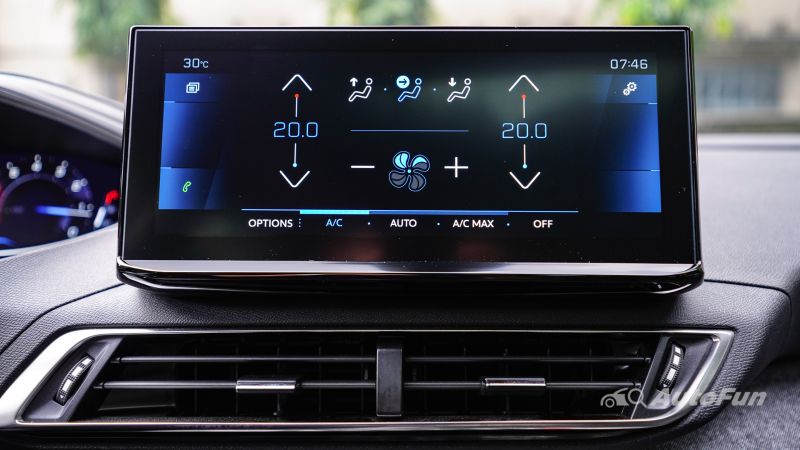 The shift knob, for example, can also be found in the Citroën C5 Aircross and the DS7. Unfortunately, the touchscreen AC, radio, and vehicle menu controls are also shared with those models. 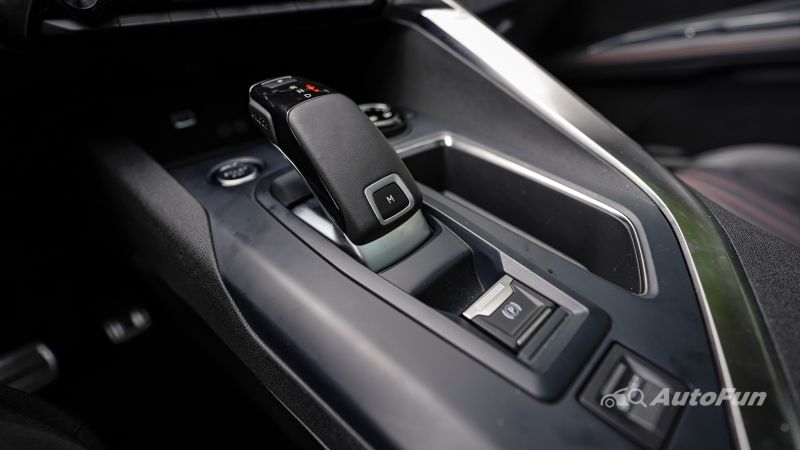 We’re not fans of touchscreen interfaces, as they can be distracting on the road. Luckily, snazzy aircraft-like toggle switches on the dash remain a fixture that easily harks back the older 5008’s interior design and provides shortcuts to the touchscreen functions. 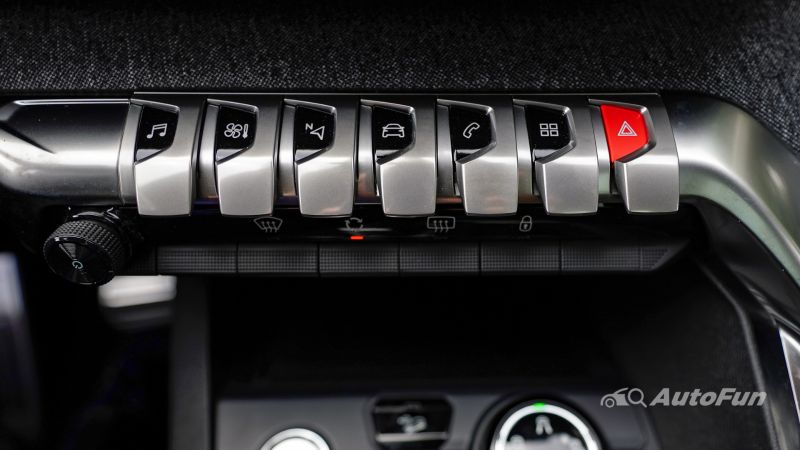 But it would be foolhardy to assume that the 5008 is all about looks and that its transition to SUV status is more deliberate than its exterior design.

Puts the Sport in SUV

The D-cut steering wheel that welcomes the driver is the most noticeable interior feature of the Peugeot 5008. With a design like this, you’d expect the car to get flung around winding roads easily. And not to disappoint, Peugeot tuned the 5008’s suspension to do just that. 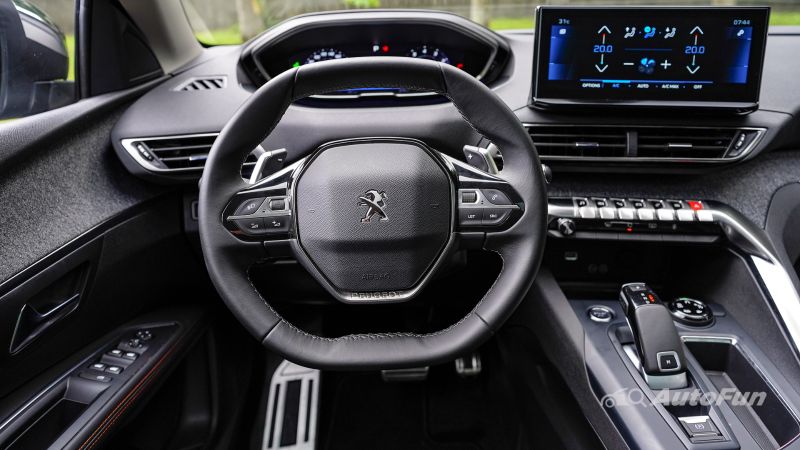 While other MPVs are engineered to be soft and cushy, the Peugeot 5008 has a firmer suspension. No, the ride is not jarring or harsh, just firm and confident, even when driving along bumpy cement roads. 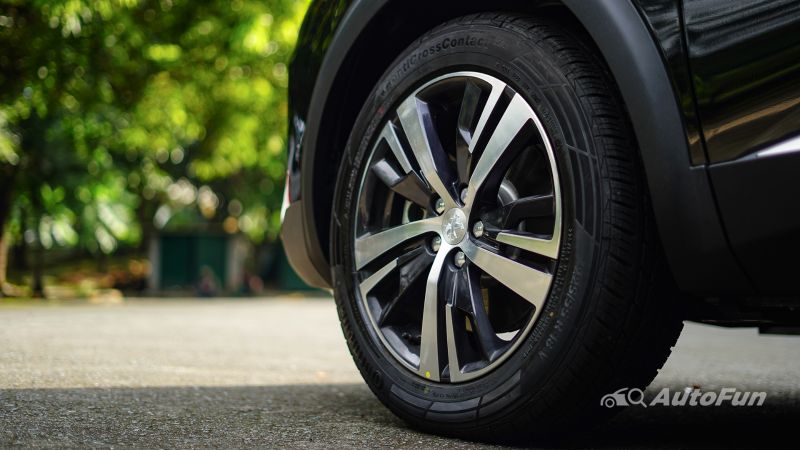 Why is that a good thing, then? Well, imagine you have a full load of people on a trip; you’d want the extra suspension stiffness to carry that load on straights and bends without leaving your passengers all dizzy and queasy from excessive body roll.

The Peugeot 5008 subscribes to the long-held impression that European cars ride stiffer than Japanese ones. But Peugeot has worked on refining the ride of the 5008 so that any experience of teeth-gnashing harshness is equally minimized. 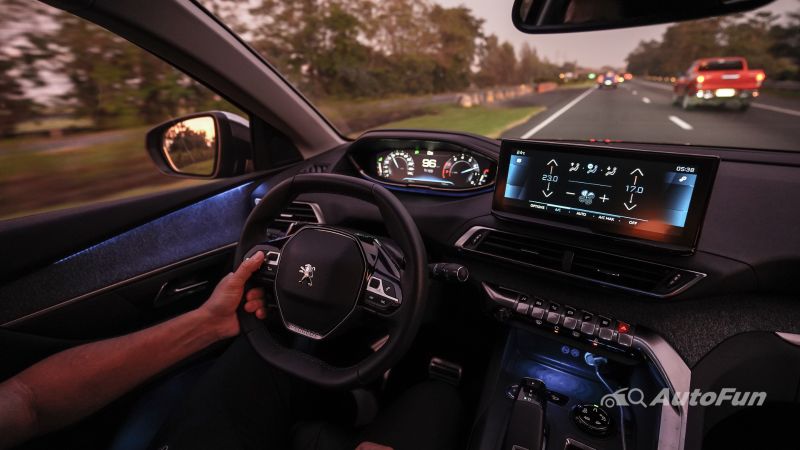 Another side-effect of this suspension tuning is that the Peugeot 5008 handles like a small hatchback – easy to turn, responsive to inputs, and satisfying to drive. Sure, you’ll hear an errant thump at the back if the roads are bad enough, but not a shortcoming, especially when the benefits of handling are weighed in.

Unlike other MPVs, however, the Peugeot 5008 has had to make compromises to achieve dynamism and those SUV-ish proportions.

For one, the third-row seat, which neatly disappears and becomes the floor behind the second-row, lacks comfort and space for normal-sized adults. We admire the Honda Odyssey-like ingenuity of the recessed third row, but we wished they had more length and height off the floor when pulled upright to accommodate passengers who are not kids. 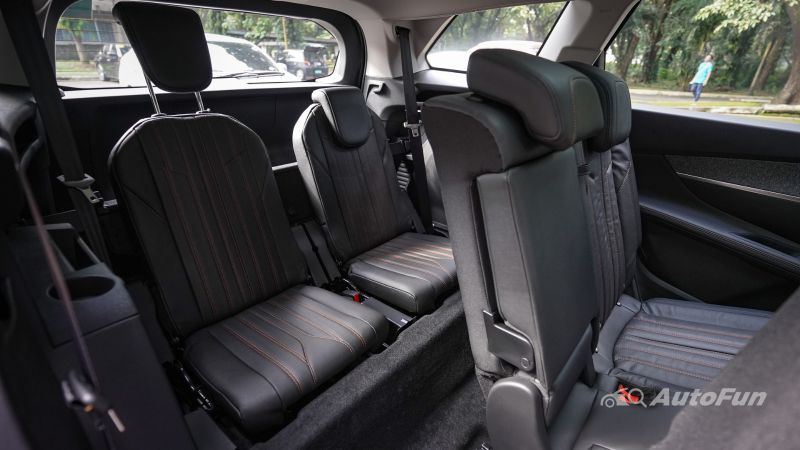 Moreover, the railings of the second-row seats can also get in the way of ingress and egress into the third row. Had Peugeot buried these into the floor, there would have been less awkward feet and leg acrobatics when accessing the rearmost seats. 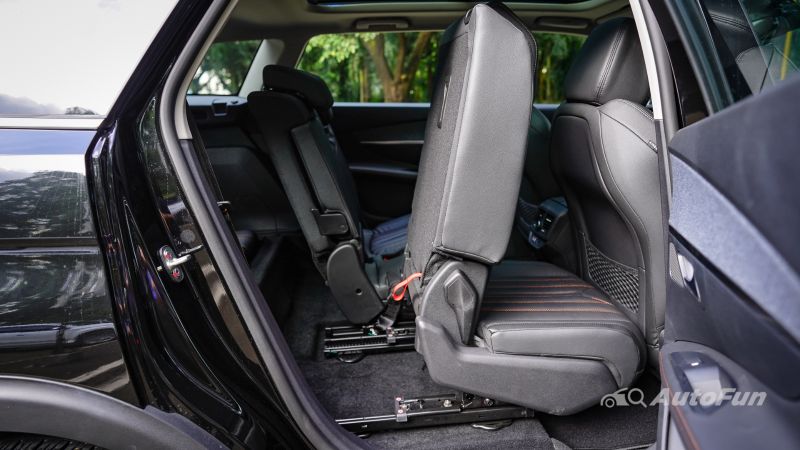 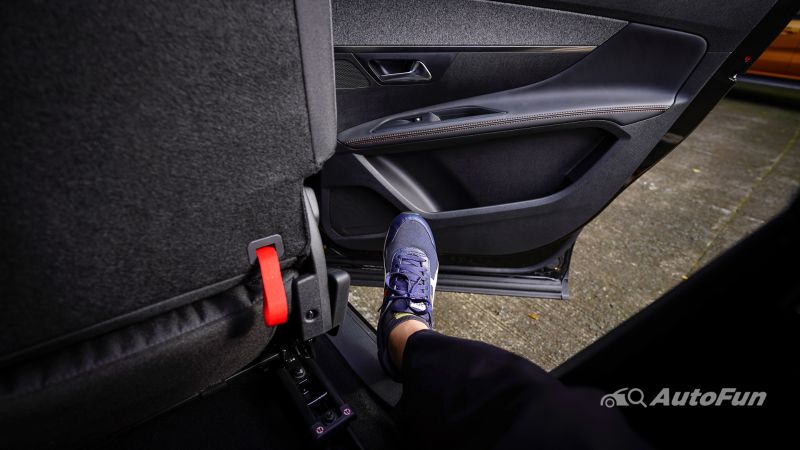 Another unorthodox implementation of a familiar feature among other cars is the 360-degree camera. With the Peugeot 5008, and indeed even with its Citroën and DS cousins, the top view, which should let you see what’s on the sides and rear of the vehicle, only assembles itself as the car backs up. Images from the rear camera are stitched together to show what’s around you. And no, it doesn’t have front or side mirror cameras to complete the view. So if you’re maneuvering back and forth, tough luck, the system won’t help. 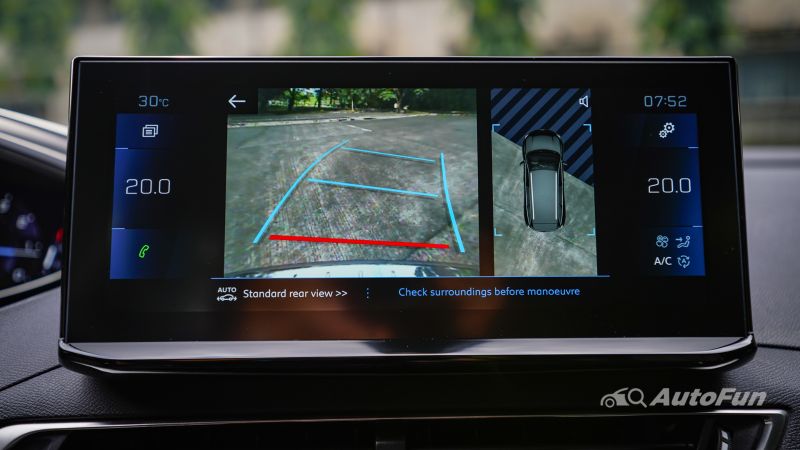 Fortunately, you do get a configurable 12.3-inch instrument cluster with animated transitions to keep you visually entertained from time to time as you read through the car’s performance numbers. 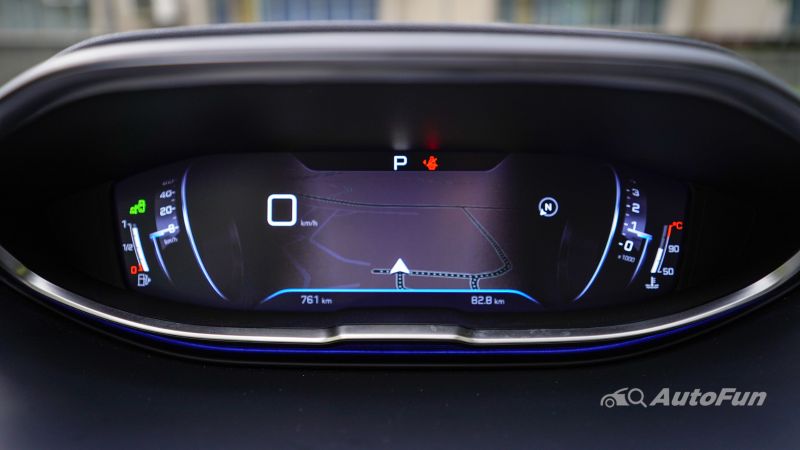 And while the sound system may be run-of-the-mill, it is still decent when playing Spotify tunes from your Apple CarPlay or Android Auto-connected mobile phone. 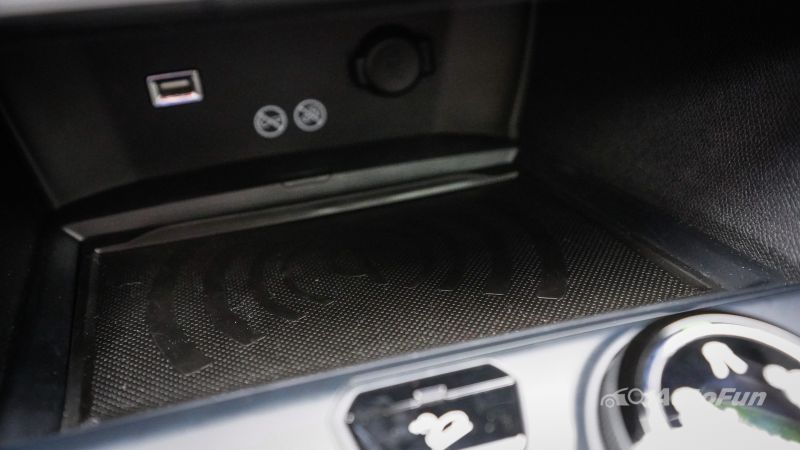 There’s a vast 2,042 liters of real estate at the back when the second and third rows are folded flat. And finally, the panoramic sunroof with surrounding ambient lighting rounds up the interior offerings of the Peugeot 5008. Sitting or lying down at the back, with the roof shade open at night, can be a soothing experience. 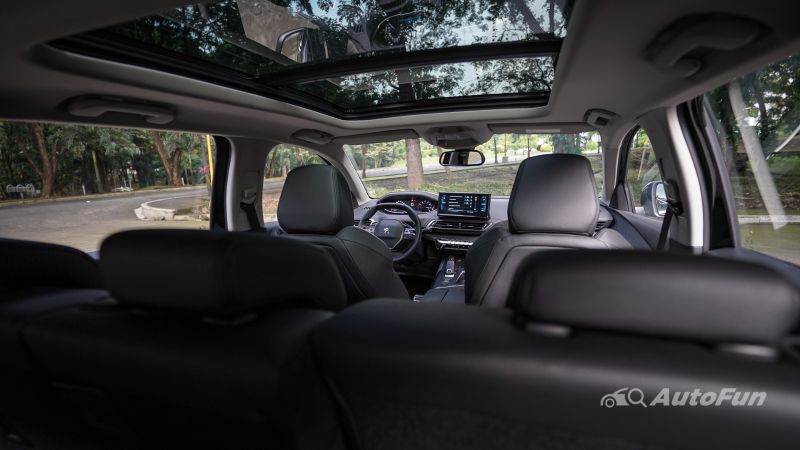 Can it go up Baguio?

We’re glad you asked because that’s exactly the trip we took!

On a rainy, typhoon-hit Sunday morning, we decided to gas up with Shell V-Power, the 5008’s recommended juice, and see for ourselves how capable this people-hauler is heading up the City of Pines. 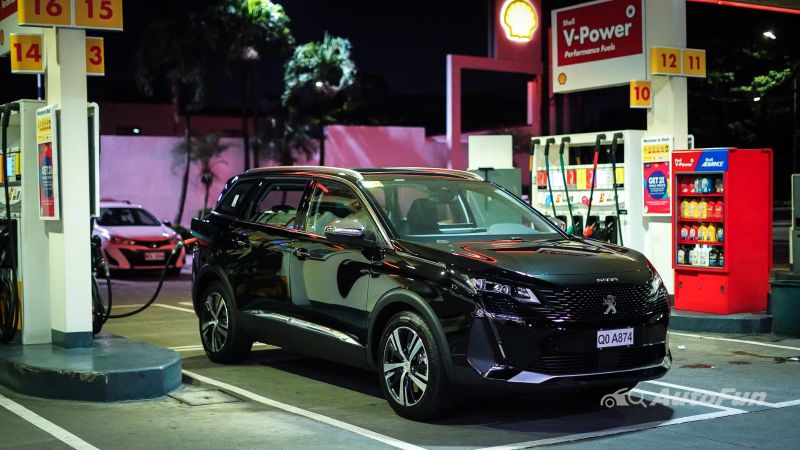 Granted, only two of us were in the car, but the Peugeot 5008 could climb. With only six automatic gears underneath us, the paddle shifters and the manual override of the transmission made the trip all the more engaging. Leave it in automatic, however, and you’ll notice a delay in throttle response or a gear selection that was a bit off for the intended acceleration. 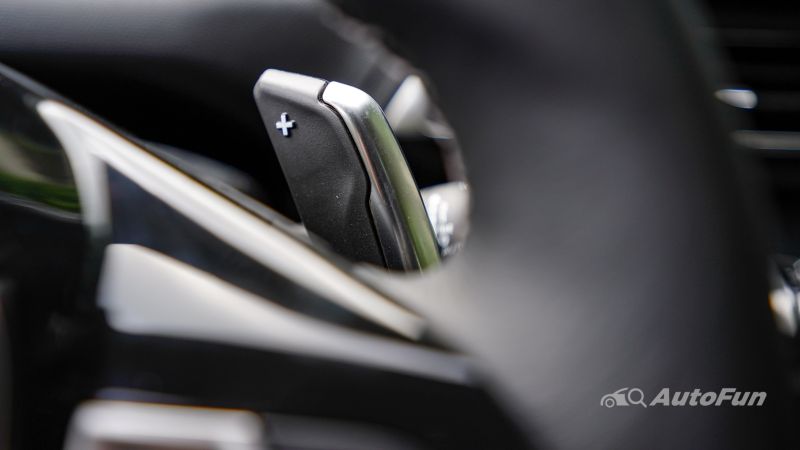 With its 167 PS and 240 Nm 1.6-liter Twin Scroll Turbo High-Pressure Direct Injection mill, we were able to reach Baguio in good time. We did notice that the 5008 was able to muster a fuel consumption figure of 13.3 km/l on the highway, which is not exactly stellar. And since it’s not a diesel lump, torque wasn’t as free-flowing as we wanted. 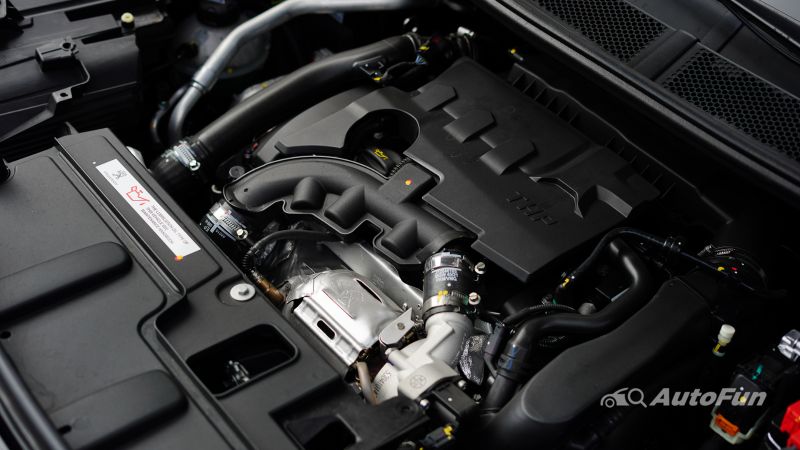 What left a positive impression on us was how the Peugeot 5008 handled the twisties with ease and composure, even on the wet and soggy switchbacks of Marcos Highway. And this made the drive even more satisfying. 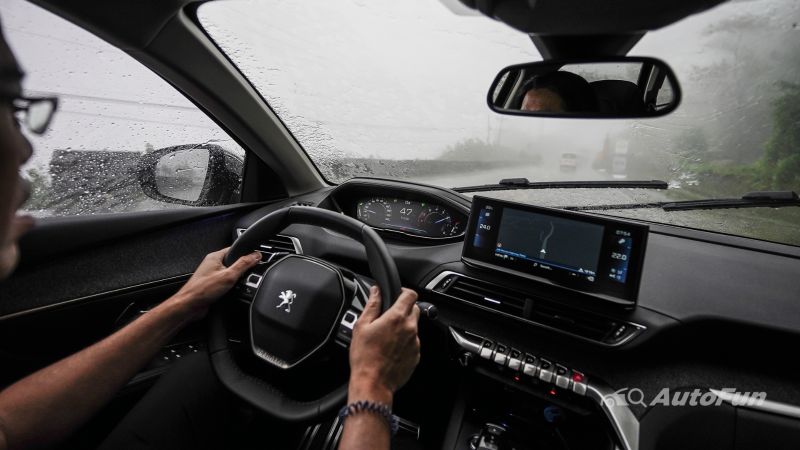 And, of course, no trip to Baguio would be complete without sampling the local fare. Yummm 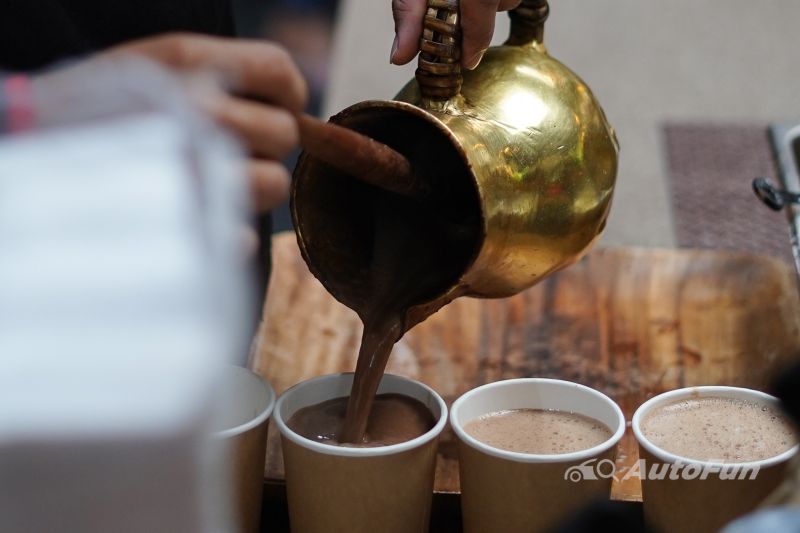 In a market with an overwhelming selection of MPVs, the Peugeot 5008 comes in a little late to the party. However, it does arrive all dressed up and raring to mingle.

With MPVs now moving away from ladder frames and embracing unibody construction, the Peugeot 5008 is ahead of the pack with regard to vehicle dynamics and aesthetic presence. 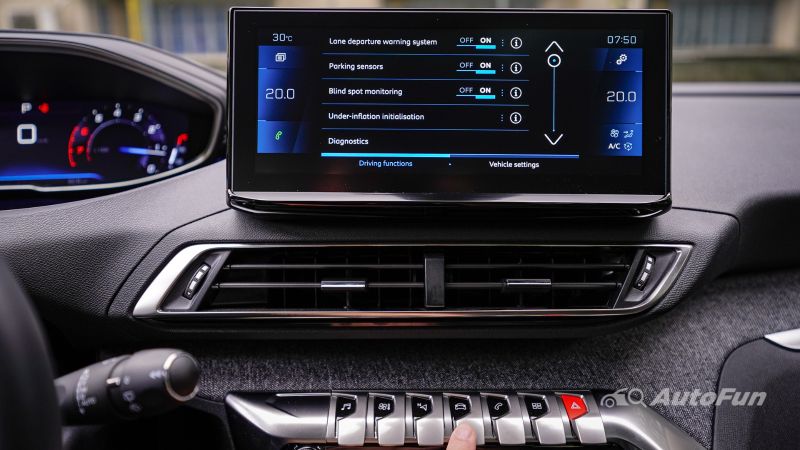 Its fit and finish, while unorthodox, manages to work. It has the usual slew of safety gizmos, such as Active Blind Spot Detection, Active Lane Keep Assistance, and Advanced Driver Attention Warning. It even has Advanced Grip Control to maximize traction over various surfaces. 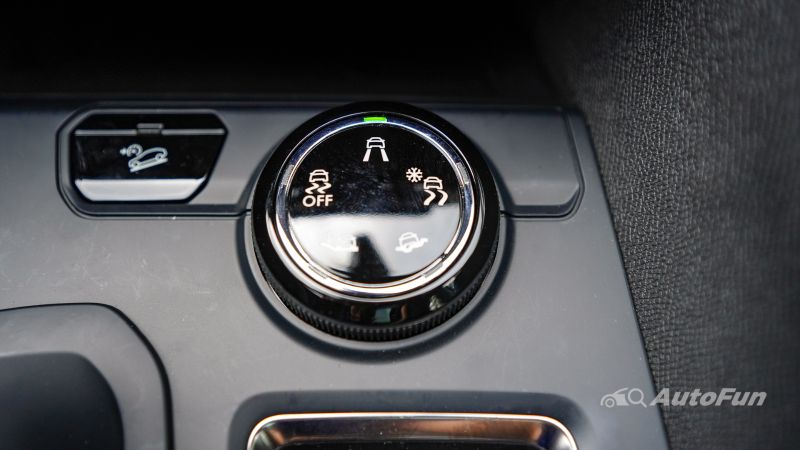 So if you’re in the market for something different, uncommon, and anti-vanilla, then the ₱2,435,000 Peugeot 5008 deserves some of your attention.  While its distinction lies in its unconventional product positioning, this MPV more than lives up to the expectations one would have from a proper SUV. 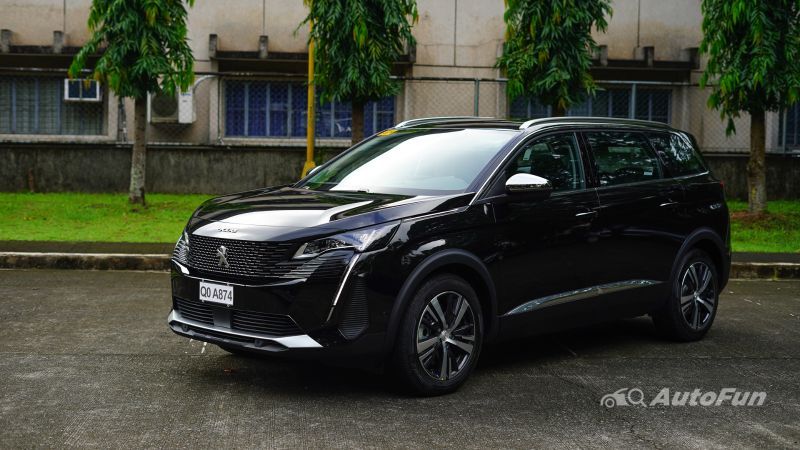