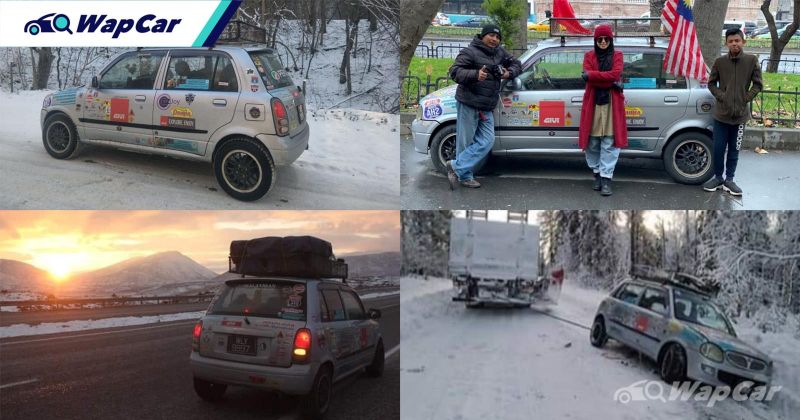 According to Aimpro Samudra – we all have to be a bit crazy to pursue freedom in life – who, true to his words, drove his little Perodua Kelisa to over 20 countries across Southeast Asia, Europe, and Central Asia, a journey that has taken over 3 years, and counting.

Hailing from Tampin, Johor, Aimpro Samudra (who works as a contractor) and his eldest son set out in their family’s 2004 Perodua Kelisa, nicknamed “Wheely” from Malaysia on 4-November 2019 according to Wau Post.

The trip has taken over three years, taking Samudra and his Perodua Kelisa from Malaysia to Thailand, Myanmar, India, Pakistan, and Iran as well as European countries such as Turkey, Bulgaria, Romania, Hungary, Croatia, Germany, Netherlands, Denmark, Sweden, Norway, Belgium, France, Italy, Switzerland, and Greece, although not in that order.

Driving in some of the most treacherous terrains in the world, the Samudra and his Kelisa have travelled across snowy mountain passes, sub-zero temperatures, rough terrain and hazardous high-altitude roads – a journey measuring over 15,000 km, according to our estimates.

Also read: Perodua Kelisa – The modern successor to the Mini

But it hasn’t been easy, Wheely has taken quite a battering, having slid off the road in icy conditions and suffering a puncture when passing through the Karakoram Highway. Besides a stout Kelisa – seemingly hardwired with heart to keep moving – Samudra notes the kind friends and locals that have helped him to keep going in the toughest of times.

Having started his trip in Nov 2019, Samudra had cut short his adventure and returned to Malaysia as Covid-19 lockdowns started all over the world in 2020. Alas, when resuming his adventure on 15-September 2022 – the Kelisa suffered from gearbox issues, which required a major rebuild.

With help from acquaintances in Turkey, along with help from mechanics in Malaysia – Samudra was able to rebuild his gearbox and get back on the roads again.

From Turkey, Samudra and his son set a course for Iran and later Pakistan, driving their Kelisa through some dangerous territories that required escort by the Police, Army and Khyber Pakhtunkhwa Police (KPK) for almost one week until they reach Islamabad, Pakistan.

From there, Samudra’s journey onwards to the borders of China would require them to pass through the Karakoram Highway – one of the highest paved roads in the world – but was cut short due to adverse weather and snow at the Kunjerab Pass, which borders Pakistan and Tajikistan.

At this point, Samudra returned to Lahore, Pakistan to store Wheely at a friend’s place before coming back to Malaysia for the recent General Elections.

According to Samudra, the most treasured aspect of his adventure is being able to do something different, while building precious memories with his eldest son.

Samudra advises all Malaysians, “Don’t ever give up! Sometimes you have to be a little crazy to do crazy things. Also, be kind to the people around you no matter who they are.”

Moving forward, Samudra plans to continue on his adventure, before finally bringing his Kelisa, Wheely, back to Malaysia, proving that any Malaysian can achieve what he has done if they have the spirit of adventure and will, just like his Kelisa… a small car that has conquered, and continues to conquer a big world.

Source: Far from Malaysia, this little Perodua Kelisa drove across 20 countries in 3 years