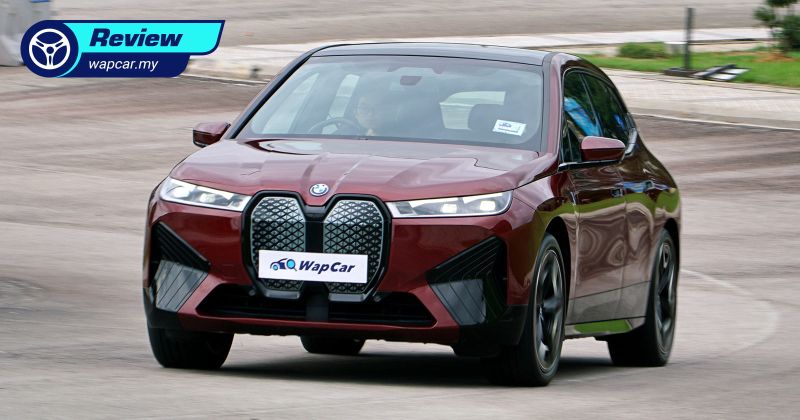 In the ever pursuit of efficiency, the driving experience in modern cars have become more and more similar. The low-end turbocharged grunt, sharp electric-assisted steering, slick-shifting transmission, etc. are characteristics that apply to the majority of European models from VW, Mercedes, or BMW. 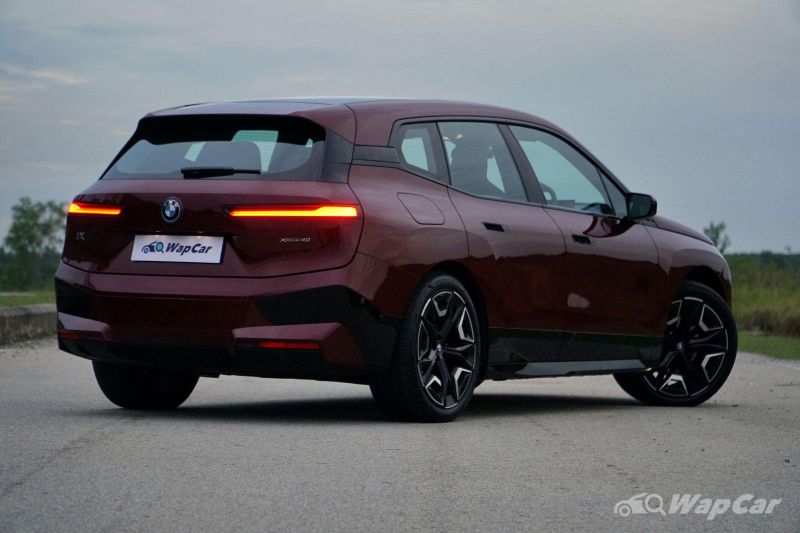 The emergence of electric vehicles (EVs) is bringing the driving experience even closer to one another. With electric motors, there’s no distinction in sound and its power delivery is always immediate and relatively constant.

Does that mean that all EVs drive the same then? Well, similar, but not identical. Discerning drivers will still be able to tell the difference – the key is calibration. And the company that touts “Sheer Driving Pleasure” has done an exceptional job on the BMW iX, in terms of driving, that is.

Exterior – At least you can’t see it while driving 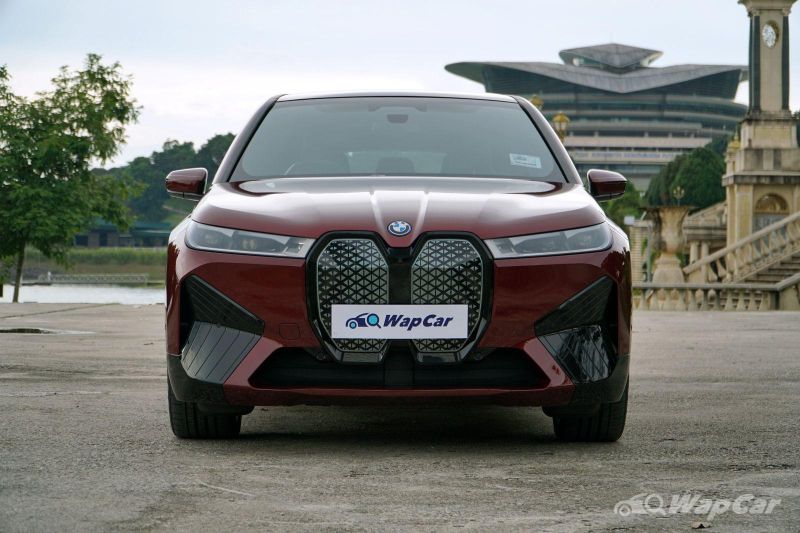 What many would argue isn’t exceptional, is the design. Much have been said about the design of recent BMWs – the BMW iX included – and to put lightly, it’s not particularly positive. It all revolves around the front grille.

But this writer will not get into it further because there’s been enough chatter about it, either you like it or you don’t. So from this point forwards, the word “grille” shall henceforth be prohibited. 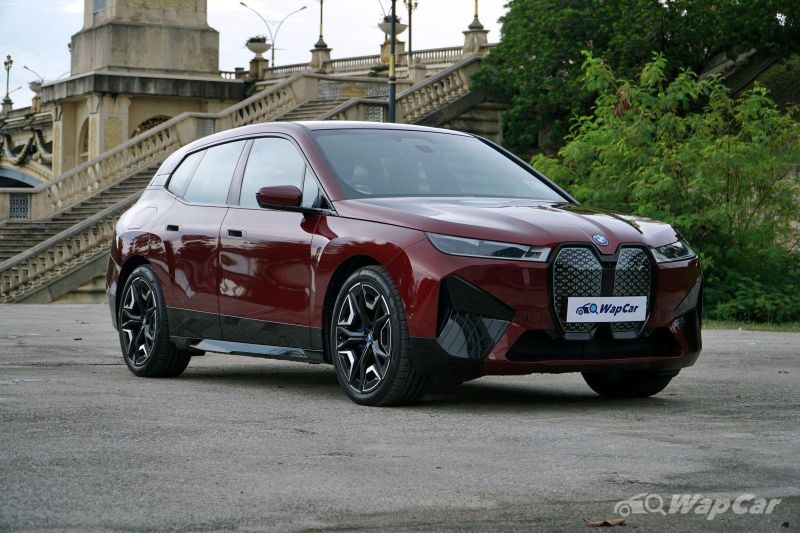 If we take its most distinctive feature that makes it look like a beaver away, the iX is actually quite a looker. It’s well-proportioned with a good blend of curvatures and sharp lines.

The taillamps are slim with just a hint of the L-shaped graphics to tie in with other BMWs and enhances the width of the car. The pronounced tumblehome (inward angle of the glass area in the upper of the car) and shoulders give it a muscular, squat look. 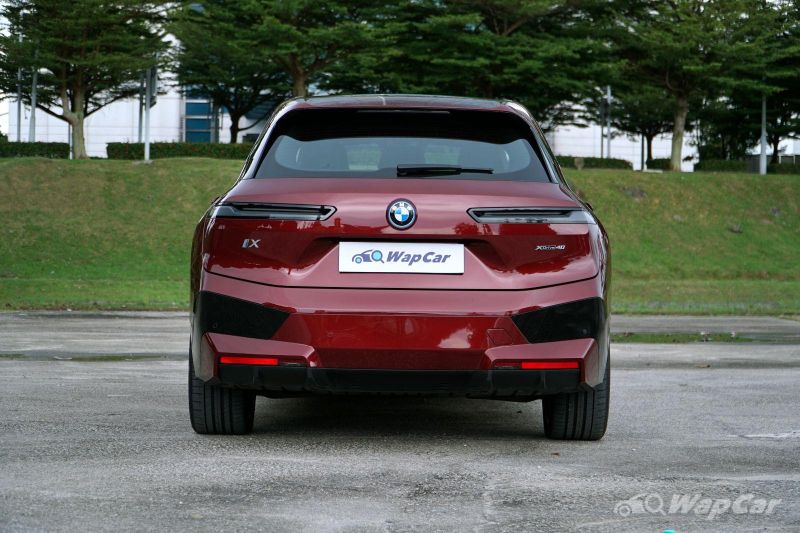 Frameless doors, which are not common in SUVs, make the iX feel a little more special. Flipside is that it can sound rattly upon closing. Personally, it’s a non-issue but Malaysians with their fascination with door-closing sounds may be turned off slightly. 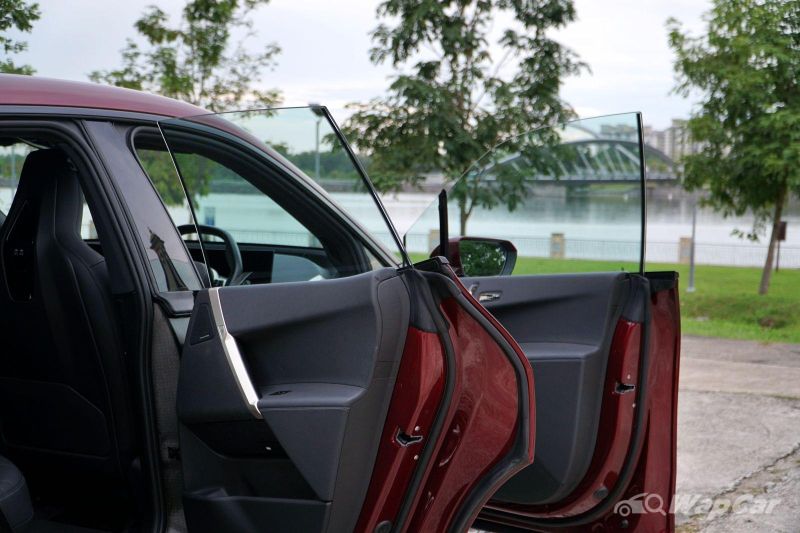 Speaking of doors, its handles are in the form of a slot which I think works better than pop-up ones. For one, it simply functions like a regular door handle without unintentional retractions. 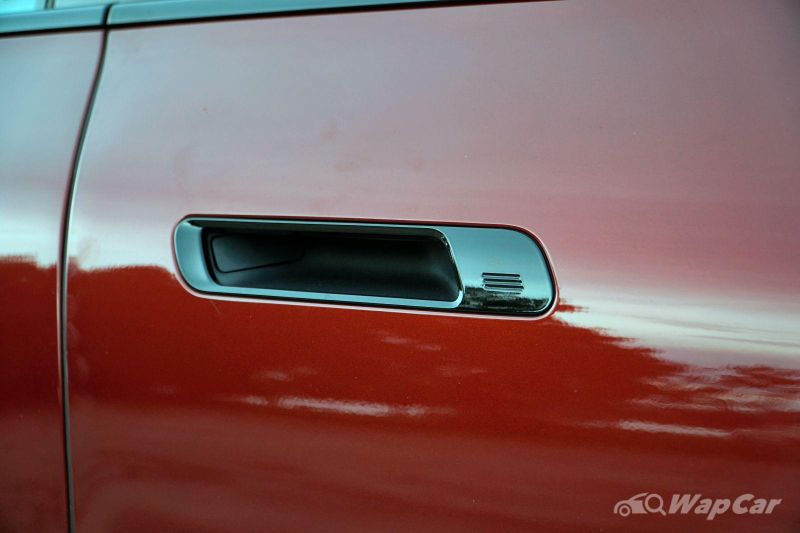 Another neat idea is using the front logo as a lid for the washer fluid. Why is it located there? It’s because BMW discourages owners from opening the bonnet as there are no user serviceable items within the bay, nor a front trunk (frunk). 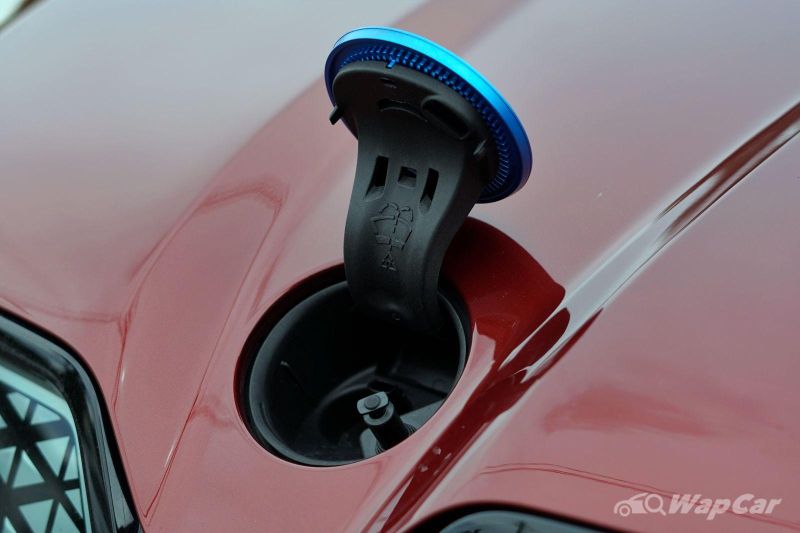 Interior – The dawn of a new era from BMW

Inside, the BMW iX marks the start of a new generation BMW interiors. It’s the first to utilize the BMW Operating System 8 (OS 8) and the curved display with a pair of widescreens consisting of a 12.3-inch digital instrument cluster and 14.9-inch infotainment screen.

To use, the OS 8 feels somewhat smartphone-like with its tiled icons menu and widgets on the home screen, which makes it intuitive for most users that are accustomed to smartphones by now. Operation is blazing fast with almost zero delay upon start-up. 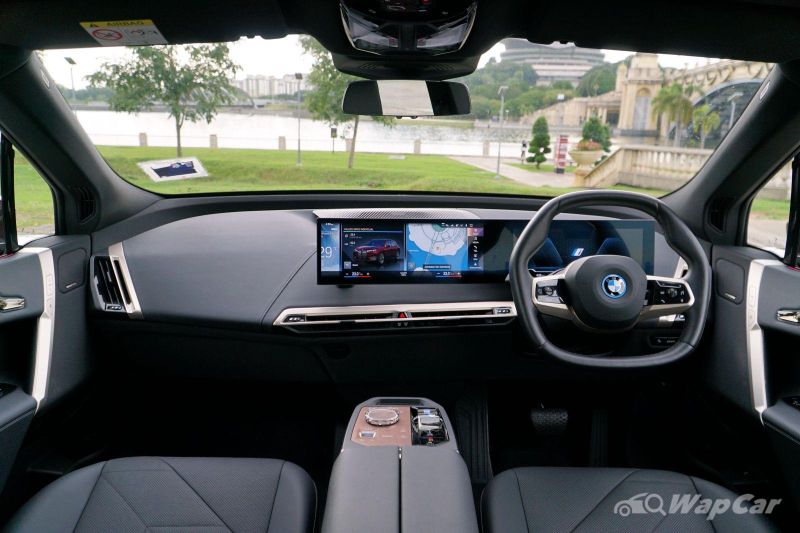 The number of buttons of switches have also been reduced to give a more minimalistic design. Adjusting the climate control is done exclusively via the screen, which doesn’t always translate to a positive experience but at least in the iX, it’s easy to reach and is always displayed regardless of menu. 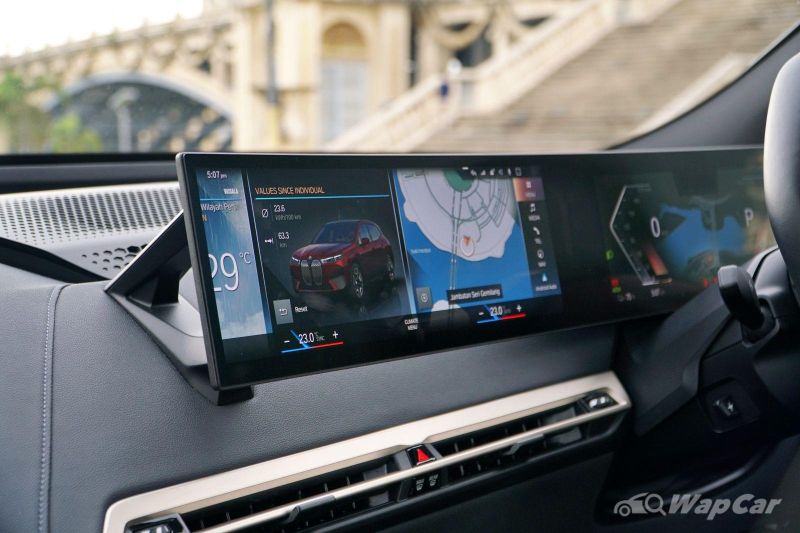 Volume control is in the form of a scroller instead of a knob on the “floating” centre panel. In this Sport trim, it gets crystal bits for the rotary control dial, “gear” selector, and seat controls. And looking at those items, it does remind this writer of other European premium brands. 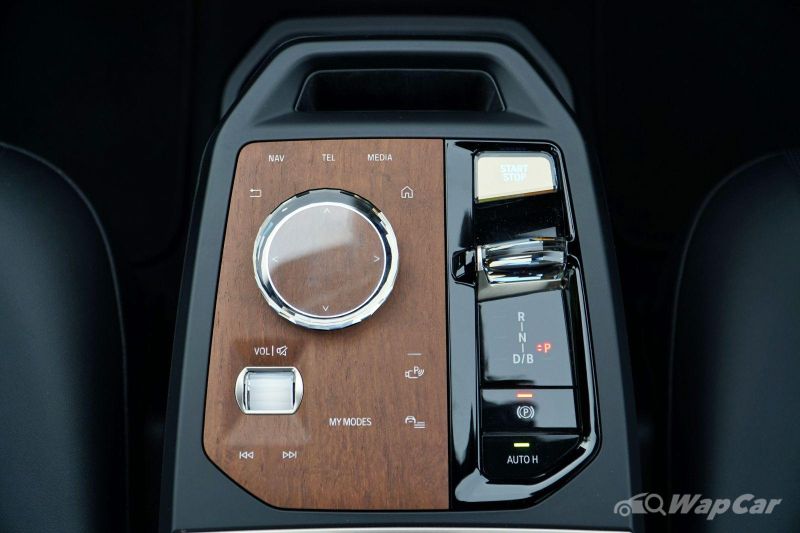 The wooden centre panel is reminiscent of Volvo and the seat controls placed on the upper door cards is just like in Mercedes-Benzes. Also like Mercedes is the dual-widescreen displays but then again, this trend can be seen in other cars as well. 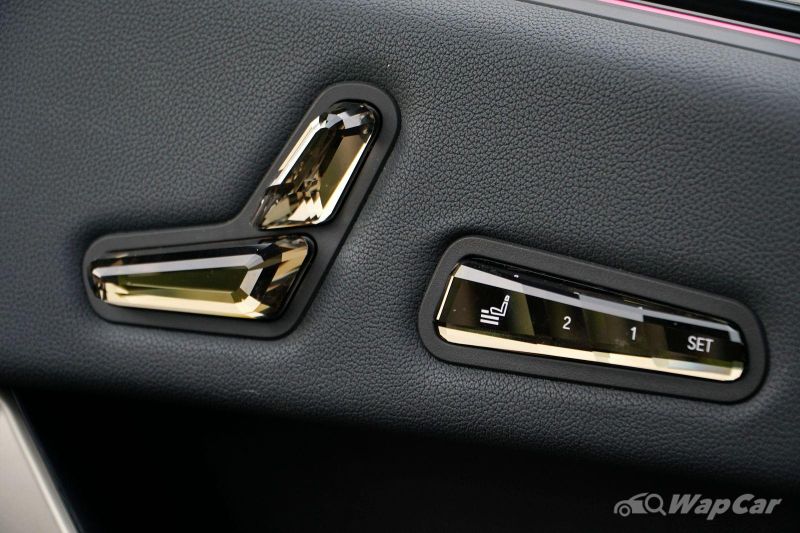 The steering is an odd 2-spoke hexagonal-shaped wheel. Some might feel that it’s awkward to hold at first, but will likely become used to it in time. More impressively, there is a large range of adjustments for reach and rake as well as the range for the seats, which means it can suit driver of any size. 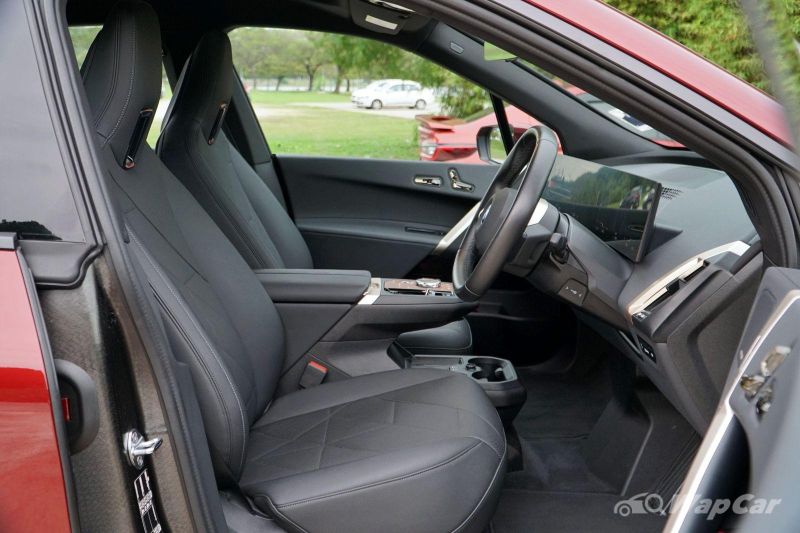 Being underpinned by a dedicated-EV platform, it makes good use of the interior space without having a transmission tunnel. Overall, the cabin just feels incredibly airy and the low window lines translate to good visibility. 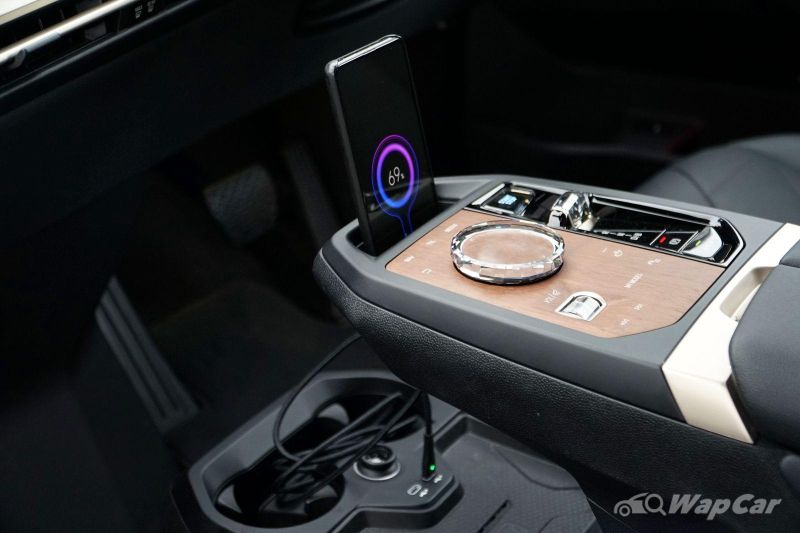 Quality of materials is slightly tricky to evaluate as BMW says it uses sustainable materials. That being said, some of the plastics do not feel as upmarket as one might expect from a premium brand. No complaints on the build quality though.

Like most other EVs, acceleration is brisk and instantaneous. No surprises. Despite being the entry xDrive40 variant, the level of performance is more than enough for most.

But it’s how in-sync and natural all the driving controls like the steering, throttle, and brakes feel in relation to the chassis. There’s minimal adjustment period needed before getting comfortable behind the wheel. 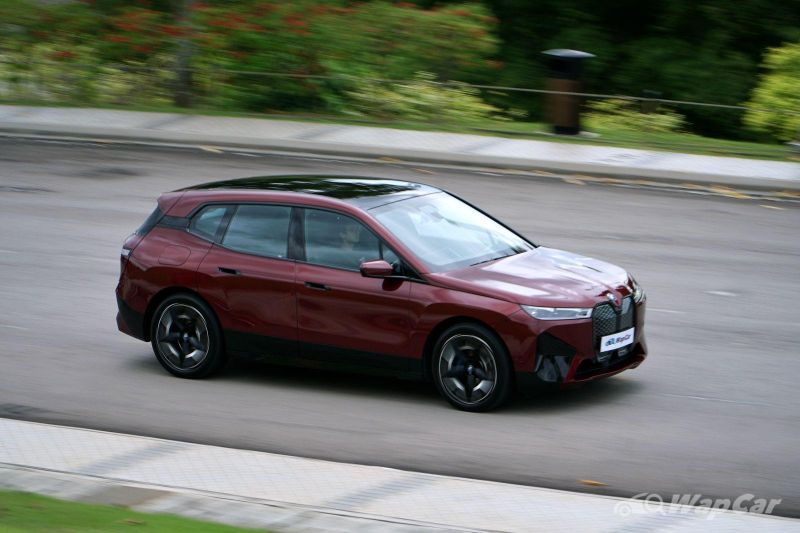 The throttle pedal reacts precisely with the amount of acceleration your right foot asks for and the brakes are one of the best this writer has felt in an EV.

Most EVs struggle with brake pedal feel due to regenerative braking, but BMW has done such a fine calibration work that it feels natural enough for first-timers. It’s not as perfectly linear and predictable as traditional brakes of course, but like-for-like with other EVs, this might be as good as it gets. 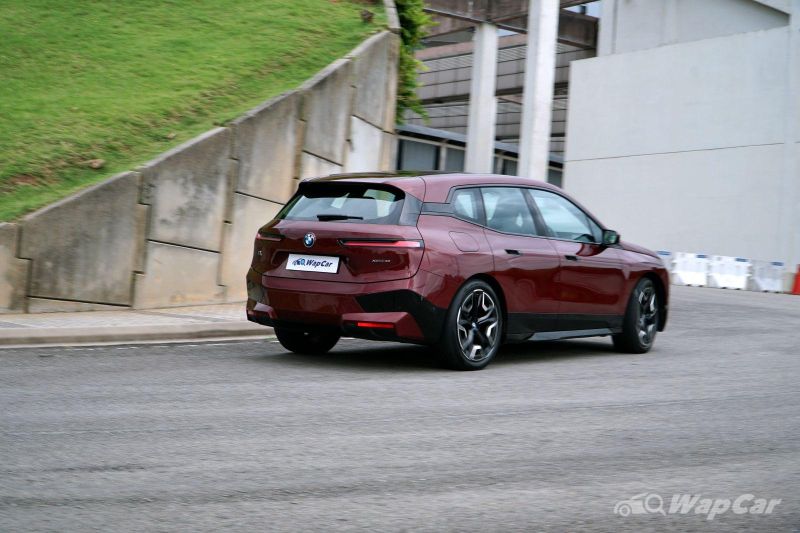 While the steering is generally muted, it’s accurate and allows you to place this behemoth right where you want on the road. Though without rear-wheel steer, it’s not easy to manoeuvre in tight spaces like say, the even larger Mercedes-Benz EQS. At least there’s 360-degree camera to assist.

It keeps things tidy in corners with rock-solid body control and can feel rear-biased when you gun it out of the bends. You do feel its weight shifting about, but it’s never alarming. 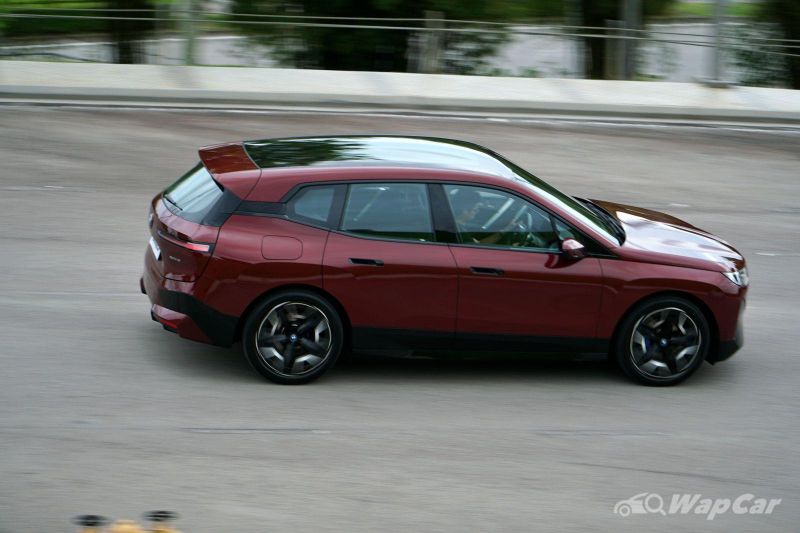 One-pedal driving is available and is also perfectly calibrated. Just flick it to ‘B’ mode and it’s activated. Those who have mastered the art of throttle modulation will find it incredibly easy to become accustomed to it.

A mark of masterful one-pedal-drive calibration is how an EV comes to a standstill. To that end, the iX stops completely in a smooth and seamless manner, without the final bit of jolt. 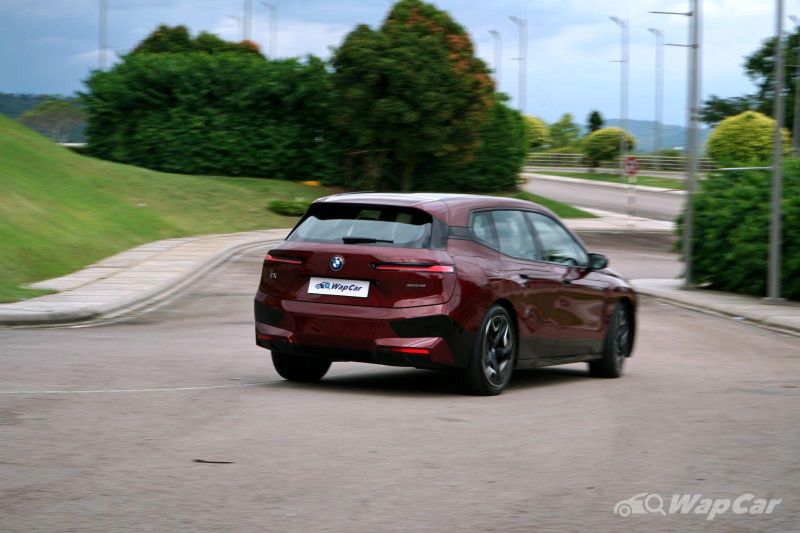 Should you opt for no-pedal driving, the adaptive cruise control with stop-and-go function, it’s not the most refined system out there. In general, it feels a little nervous with obstacles on the road and eager on the acceleration/deceleration. But it’s nit-picking at this point. 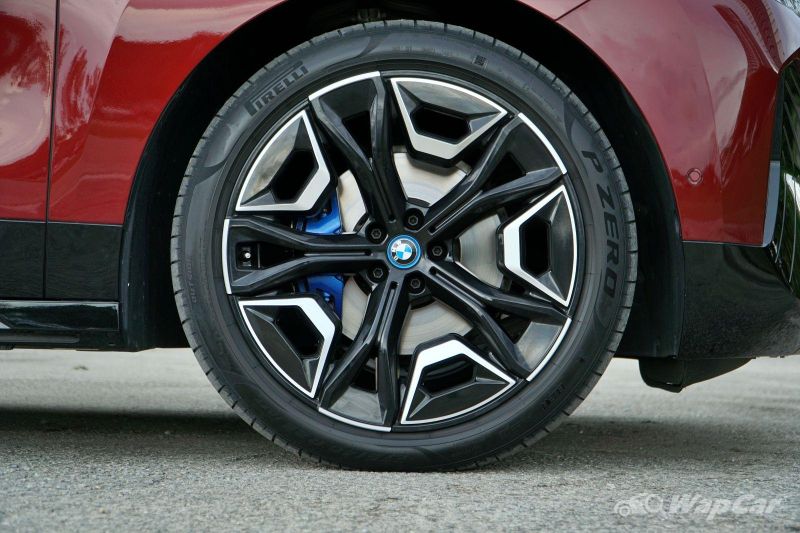 In terms of refinement, the BMW iX is perhaps the smoothest and quietest car to be in under half a million Ringgit. It gets close to the Mercedes-Benz EQS, which says a lot considering it’s the brand’s flagship luxury EV.

But what the iX can’t compete with is the body motion of the EQS, or lack thereof. Being a taller-riding SUV, the iX has to deal with amplified lateral motions that cause the driver and/or passengers to rock about in the cabin when going over uneven roads. 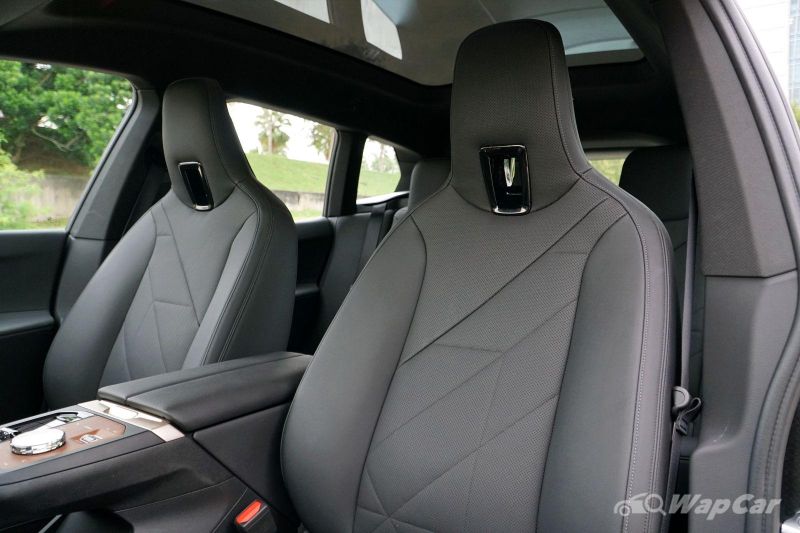 It’s physics and yours truly suspects that even air suspension will struggle to keep it as levelled as lower-riding sedans. That being said, it manages the body movements much better than the Volvo XC40 EV for example, partly due to the longer wheelbase while the other part is the spot-on damping. 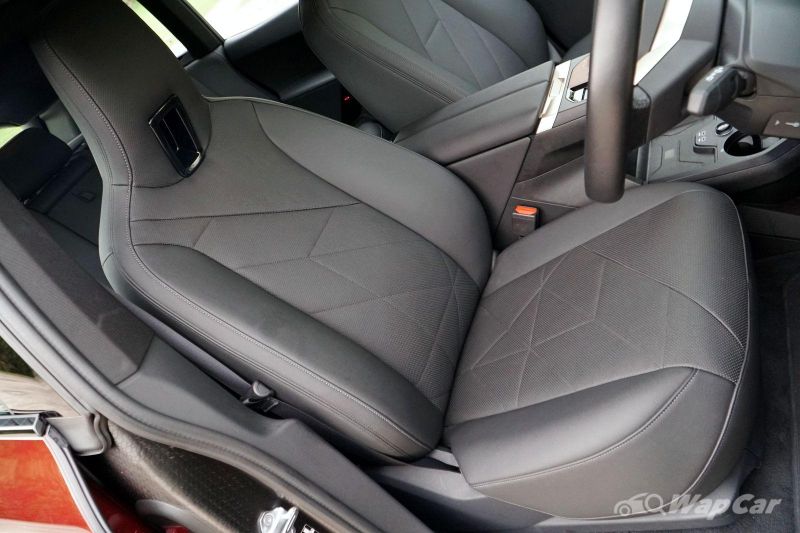 Suspension damping is masterfully judged and rides over undulations beautifully. Low speed, secondary ride over sharp impacts is equally impressive with zero jiggles or judders despite its massive 22-inch wheels. 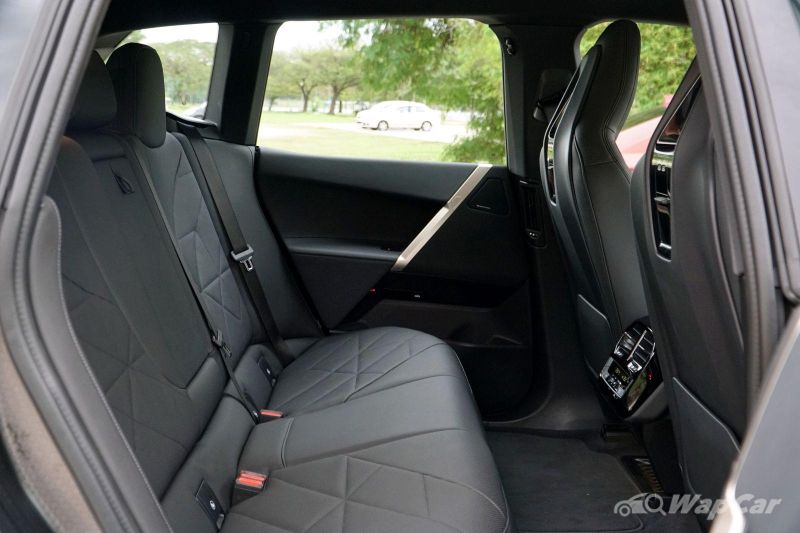 The seats are rather soft by ‘Conti’ car standards, but they’re on the flatter side without much sculpture to hug your body. It’s more of an armchair in that respect. At the rear, thigh support is decent by EV standards with the high floor. 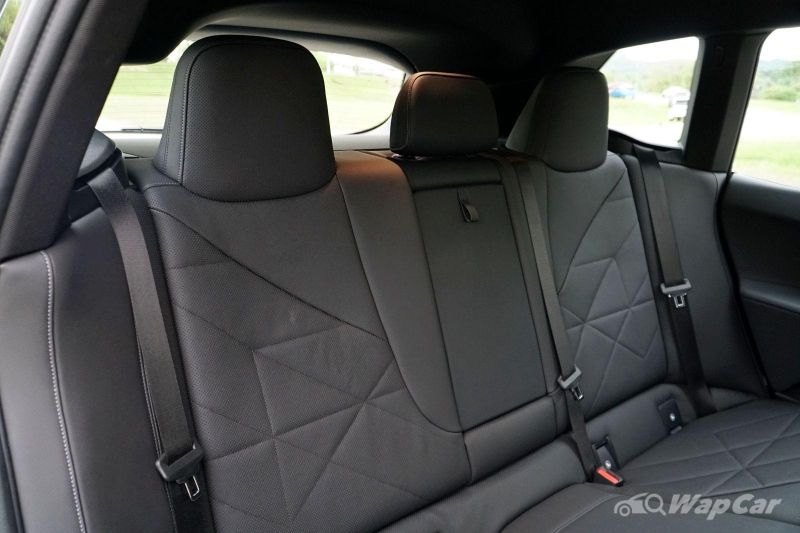 Noise wise, the BMW iX averaged similar sound levels to the Mercedes-Benz EQS. Both are almost eerily quiet on the move with incredibly muted tyre, wind, and powertrain noise. The difference is perhaps at much higher speeds in which the EQS’ slippery exterior produces less wind turbulence. 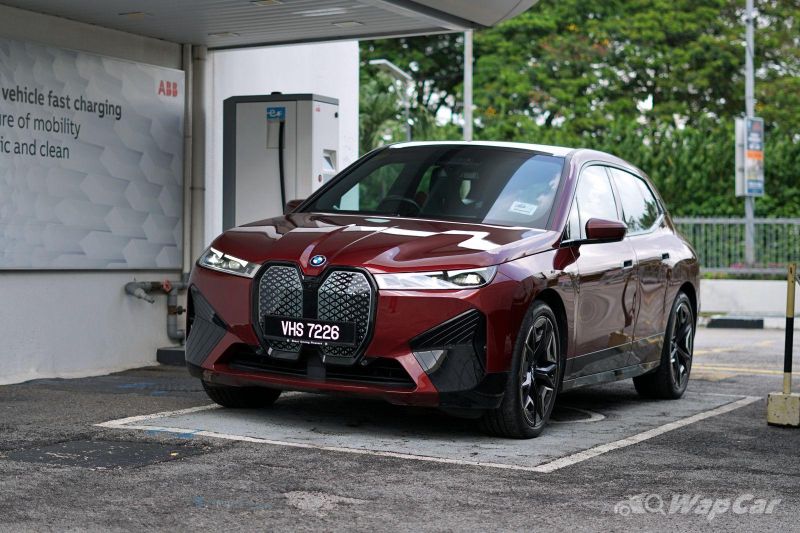 Over a 195.0 km trip with a mix of city and highway driving, the trip computer indicated an average energy consumption of 17.0 kWh/100 km. Regenerative braking was left in moderate for majority of the journey, with the occasional switch to ‘B’ mode (one-pedal drive) in stop-and-go traffic. 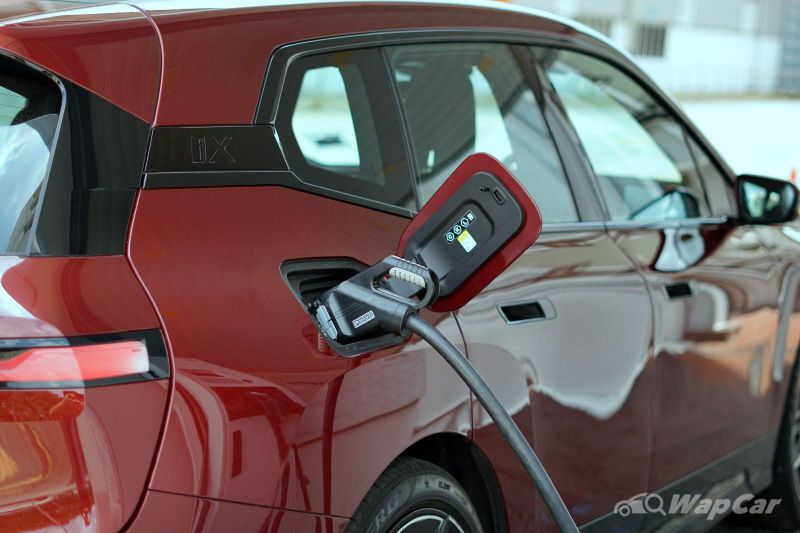 Our calculations revealed the actual efficiency at 18.6 kWh/100 km based on energy delivered after two consecutive charges to 100 percent (similar to how we perform fuel consumption tests). 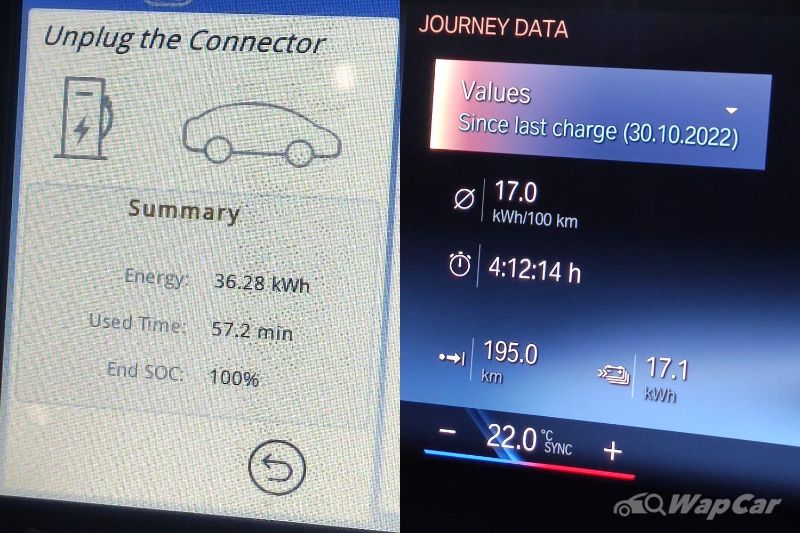 In theory, the 76.6-kWh battery would allow a maximum real-world range of around 411 km, which is close to the claimed 425 km range.

Considering the iX’s size and weight, it’s quite an impressive figure. The smaller Mercedes-Benz EQA and Volvo XC40 EV for example, struggle to achieve below 20 kWh/100 km. 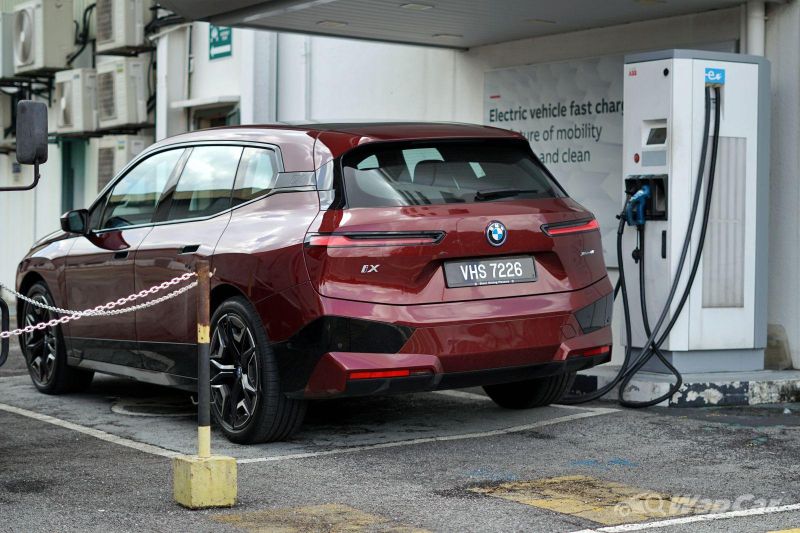 If you think all EVs are the same, then you might not have driven this one. In short, the BMW iX is a brilliant EV. It’s well-packaged inside, drives as well as a BMW should, its fifth-generation electric motors are efficient, and it’s one of the most refined cars we’ve ever tested. 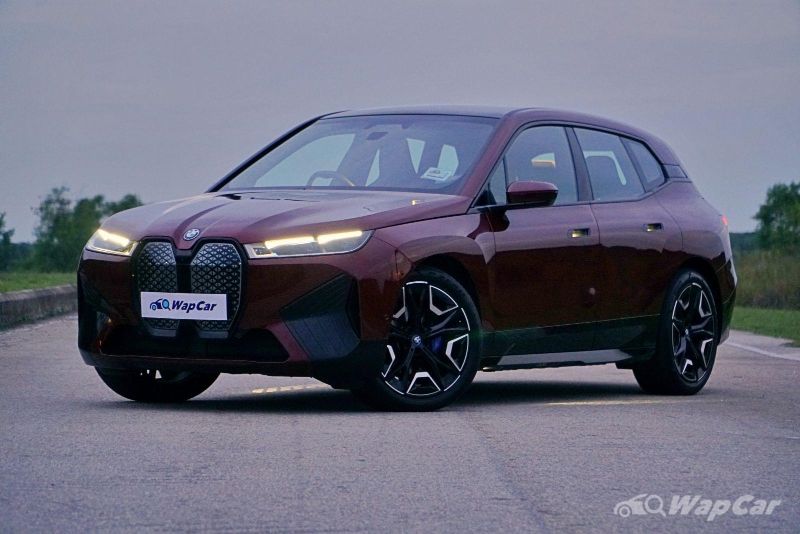 Its biggest obstacle would be the looks. If you have no objections to its design, particularly the front-end, then there’s really not much to dissuade you apart from the nit-picks about the ride and some of the choices of materials.

For RM 425k, very few can match this combination of space, refinement, performance, and features. Perhaps none can command such road presence, courtesy of its front… panel.

Also read: Here’s the list of every EV officially on sale in Malaysia, currently in 2022